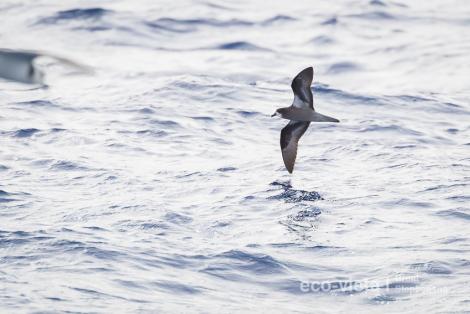 The collared petrel is a small, variably-plumaged gadfly petrel of the tropical south-west Pacific, which is occasionally recorded in northern New Zealand coastal waters. It is a poorly-known species, with a handful of breeding sites known in Fiji and Vanuatu.

Collared petrel is a small dark-capped gadfly petrel (similar in size to a prion) that can be a challenge to identify due to its variable plumage. The palest birds closely resemble Gould’s petrel (but see underwing description below). The commonest morph in Fiji (the breeding population closest to New Zealand) has a diagnostic dark collar across the upper breast, separating the white cheeks and throat from the white belly. The underwing pattern also differs from similar species. The overall pattern is similar to black-winged petrel and Gould’s petrel, with a central white panel surrounded by dark flight feathers and a dark leading edge extending as a finger of dark from the middle of the leading edge towards but not reaching the belly. However, collared petrel differs in having a broader dark trailing edge to the wing (due to flight feathers being dark to their bases), and dark and intermediate morph birds have a thicker black leading edge to the outer underwing. The darkest birds are almost black apart from contrasting white cheeks and throat, a pattern unlike any other petrel species. Some birds have markings similar to mottled petrel (i.e. with a smudgy dark belly), but collared petrel is smaller and more lightly built, and mottled petrel does not have a dark collar. The pale grey mantle grades to darker grey on the rump, and the long tail has a brown wash. The upperwings are dark brown-grey with an indistinctive blackish elongated ‘M’ extending across the back (most obvious in fresh plumage). The slender, hooked bill is black, the eye is dark, and the legs and toes are grey or pink with dark outer toes and webs. The sexes are similar and juveniles resemble adults.

Voice: collared petrels in flight over the colony at night give a rapid high-pitched “ki-ki-ki...”, sometimes preceded by a deeper “borr” which is also given on the ground.

Similar species: collared petrel has a broader dark trailing margin to the outer underwing than other small ‘Cookilaria’ gadfly petrel species (including Cook's, Pycroft's, Stejneger's, Gould’s and black-winged petrels), and most birds have a darker leading edge to the outer underwing and either or both a dark collar or a dark belly (neither of which is found in any of these otherwise similar species). The ‘Cookilaria’ species regularly present in New Zealand waters (Cook's, Pycroft's and black-winged petrels) all have paler grey heads. Gould’s petrel has a darker and more extensive hood than collared petrel, and rarely has a full collar. Stejneger's petrel has the dark ‘hood’ reduced to more of a cap (with a broader white forehead, and a wedge of white below the ear, separating the cap from the dusky sides of the upper breast). The palest collared petrels are very similar to Gould’s petrels, which can have variable amounts of white on the face and fore crown.

The collared petrel is considered to be declining and to number fewer than 7,000 individuals globally. It has an IUCN threat ranking of Vulnerable.

There is a single accepted record from near the Three Kings Islands in March 2011. A more recent record from the same locality has not yet been submitted to the Birds New Zealand Records Appraisal Committee.

Former breeding populations on Viti Levu and possibly Vanua Levu (Fiji) were probably extirpated by the small Indian mongoose (introduced to control rats in sugar cane fields). Some populations are utilised as a food source (mainly the harvest of fully-grown chicks), but predation by introduced rats, cats, pigs and mongoose are likely to be the main causes of extirpations and population declines.

Breeding by collared petrels is poorly known, but conforms with the typical petrel pattern of a single egg laid in a burrow during a synchronous breeding season, and the egg and chick cared for by both adults. Breeding is apparently during the first half of the year, with eggs laid in January-February and fledglings departing in June-July.

After breeding, adults and juveniles spend the rest of the year at sea. There have not yet been any tracking studies, and so it is not known whether collared petrels migrate or stay in the vicinity of breeding islands year round. There are few records in Fijian waters during the non-breeding season (August-December), suggesting that at least some populations may be migratory, possibly eastwards towards the Galapagos Islands.

Little known. Mainly small squid and fish picked up from on or near the sea surface.

Birds of the World

A small gadfly petrel with variable plumage. Pale birds are grey above and white below, with (usually) a prominent dark collar across the upper breast. The mainly white underwing has broad black margins, with a dark diagonal bar running from the leading edge towards the body. The darkest birds are dark sooty-grey with a white face and throat.