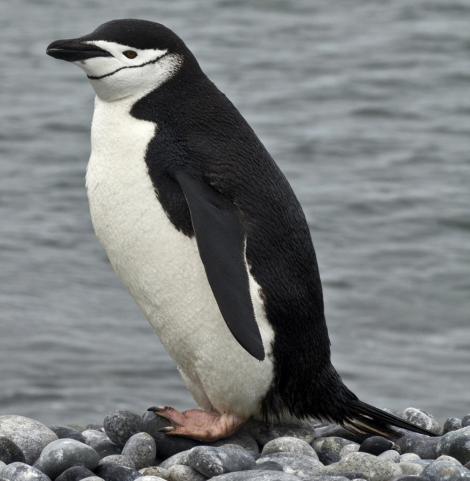 The chinstrap penguin is an abundant black-and-white penguin of the South Atlantic Antarctic sector. It is medium-sized for a penguin, and easily recognisable by the narrow band of black feathers that passes from ear to ear across the face, under the chin. A few hundred birds breed at the Balleny Islands in the Ross Dependency, which is possibly the source of the five birds recorded from New Zealand between 1978 and 2002.

Chinstrap penguins are medium-sized penguins, black above and white below. They are one of two predominantly white-faced penguins, with white extending above the eye. At closer range they have a diagnostic narrow black band diagonally across the face from ear to ear, passing under the chin. The bill and eyes are black, and the feet are pink with black soles. Juveniles have a dusky face above the diagonal band.

Voice: vocal and very noisy at breeding colonies, which pulse with their braying call “ah, kauk, kauk, kauk...” delivered with the flippers extended and the raised head swayed from side to side.

Similar species: fledgling royal penguins may also have a dusky grey face and dark bill (cf. juvenile chinstrap penguin), but will have at least some chrome-yellow feathers on the forehead. Juvenile Adelie penguins have the black-white demarcation line passing below the eye, and so are darker on the face than chinstrap penguins.

Chinstrap penguins are marine animals that nest on ice-free rocky coasts, often together with Adelie penguins. The bulk of the chinstrap penguin population is based in the Scotia Sea, east of the Antarctic Peninsula, with large colonies on the South Sandwich Islands (c. 5,000,000 breeding pairs), and also on the nearby South Orkney Islands, South Shetland Islands and the Antarctic Peninsula to 65° S. A few breed on South Georgia, Bouvetøya and Peter I Øy. The only colony in the Ross Sea sector of Antarctica is on Sabrina and Chinstrap Islands in the rarely-visited Balleny Islands, where there were about 100 pairs in 2006.

Chinstrap penguins are inshore breeders during the breeding season and even during the rest of the year they usually feed in zones with light pack ice (10 – 30%) and so are rarely seen north of 60° S.

Total population is estimated at around 12 to 13,000,000 birds, with only a few hundred birds breeding in the Ross Sector of Antarctica. The population on the Balleny Islands has increased, up from the 13 pairs recorded on Chinstrap Island in the early 1980s.

There have been five sightings of single, healthy chinstrap penguins in New Zealand. The first was on Antipodes Island in November 1978, followed by one near Invercargill (December 1980), Campbell Island (March 1984), Warrington Spit, Otago (November 1992), and South Bay, Kaikoura (November 2002).

The chinstrap penguin is not globally threatened, and is apparently increasing as the Adélie penguin declines on the northern Antarctic Peninsula. They also increased on the South Orkney Islands between 1983 and 2004.

Chinstrap penguins breed in huge colonies (sometimes hundreds of thousands of pairs), often adjacent to colonies of Adélie penguins. They arrive at breeding sites in October-November and lay 2 eggs in a small depression that is lined with stones. The eggs are incubated by both the male and the female in stints of up to 6 days duration, hatching after about 37 days. The downy chicks are pale grey on the head and back, and off-white on the belly. They are brooded on the nest for about 3 weeks, after which they join a crèche. The young birds shed their down after about 50-60 days and head out to sea.

Chinstrap penguins are extremely gregarious at their breeding grounds, and often roost in flocks (sometimes with Adélie penguins) on sea ice. Like other penguins, chinstrap penguins spend most of their life at sea, where they feed on krill and small fish. They are considered to be the most aggressive of all penguins. Chinstraps are often hunted by leopard seals, and orca have also been observed hunting and eating adult chinstrap penguins. Some chicks are taken by subantarctic and South Polar skuas.

Chinstrap penguns feed almost exclusively on Antartic krill (Euphausia superba), along with some fish and other crustaceans. Prey are caught by pursuit-diving up to 70 m depth, though mostly less than 45 m.