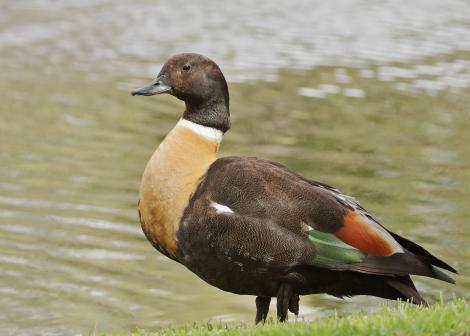 The chestnut-breasted shelduck is a frequent visitor to New Zealand. It is closely related to the endemic paradise shelduck with which it shares many plumage features. Chestnut-breasted shelducks often fly several hundred kilometres between breeding sites (used in winter and spring), to moulting sites, where they congregate in large numbers. Although apparently faithful to its nesting locations, the place where moult occurs can vary from year to year. Until the 1970s, it was known in Australia as the mountain duck, but is now most commonly referred to there as the Australian shelduck.

The chestnut-breasted shelduck is a large, mostly dark duck with a striking chestnut breast, white neck ring, and chestnut and green speculum. Females have a white eye-ring, and white at the base of the bill. The chestnut breast is darker on the female. The white neck ring of the male is often more sharply demarcated than that of the female. When seen together in pairs, the smaller size of the female is apparent. In flight, the white underwing and forewing are conspicuous, with the same pattern as the paradise shelduck.

Voice: a series of honks and grunts, similar to paradise shelduck, often very vocal, loud and harsh. The female’s call is higher in pitch than the male.

Chestnut-breasted shelducks are largely confined to south-west and south-east Australia. They are spreading northwards in the west of their range, possibly as a result of favourable changes in its habitat due to land-clearing. Chestnut-breasted shelducks disperse widely from their breeding sites, and apart from vagrancy to New Zealand, were recorded on Norfolk Island in the 1980s. They use a wide variety of habitats, including brackish water (and even the sea occasionally), farmland, woodland, crops, irrigation areas, and stubble. Most New Zealand sightings have been on lowland wetlands, often with paradise shelducks.

Chestnut-breasted shelducks were first recorded from New Zealand in 1973 at Hokitika River. There was an influx during 1982-86, with some birds persisting for several years, especially in Marlborough. They have been recorded regularly if infrequently since 2000. Chestnut-breasted shelduck have reached nearly all of New Zealand's outlying island groups, with records from Raoul Island, Kermadec Islands (1994), Pitt Island, Chatham Islands (1998), Snares Islands (1984), Enderby Island, Auckland Islands (1983-2015), and Campbell Island (1984-85). Most records have been of single birds, but occasionally up to 13 birds. There is one confirmed breeding record, from near Lake Tekapo, where a pair with half-grown young was seen in January 1985. Birds have been seen in most districts of the South and North Islands.

In Australia, chestnut-breasted shelducks can often be seen in flocks of up to 1,000 or more. Like paradise shelducks, they are typically wary and difficult to approach, but can become habituated to people in urban settings. They are very upright both on land where they graze at dawn and dusk, and on the water, where they sit very high. Although young birds dive frequently, adults only dive during their moulting period when they are flightless, or when injured or frightened. Chestnut-breasted shelducks usually breed in a down-lined cavity of a hollow tree-limb, but also sometimes in caves or burrows, and sometimes under vegetation. After leaving the nesting hollow, the flightless, downy young may aggregate in crèches of 20-40, or in extreme cases, a hundred birds.

Chestnut-breasted shelducks can feed by grazing, dabbling or filtering. They consume tubers and other plant material, including of saltbush and samphire, along with a range of crustaceans, insects and molluscs. There are few New Zealand data.