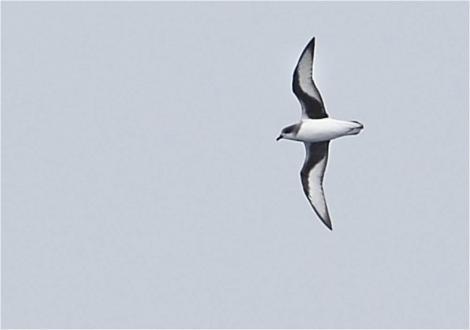 The Chatham petrel is a burrow-nesting oceanic species that formerly bred throughout the Chatham Islands, then became restricted to a single forested island. Competition with other seabirds for burrows on Rangatira (South East Island) further led to its decline. Active management allowed the population to recover to more than 150 pairs, and new colonies on Pitt and Chatham Island are being established.

One chick is produced during the 7−8 month breeding period, with parents sharing duties and foraging up to 3000 km from the colony. After breeding, birds follow an easterly migration route across the Pacific, over-wintering in deep waters off the South American coast.

The Chatham petrel is a medium-sized petrel; dark grey above, white below, with a mottled dark-grey and white forehead. A black diagonal bar extends from the leading edge of underwing to the diagnostic black ‘armpit’. The long, narrow wings are held stiffly as birds glide and wheel in flight. The bill is black and strongly hooked tip. The eye is dark, and the legs and feet are pink, with dark outer toes and webs. The sexes are alike. Chatham petrels are rarely observed away from the colony; the few at-sea records are from ships in oceanic waters.

Similar species: black-winged petrel is similar, and breeds in low numbers on Rangatira; it differs in having much less black on the inner underwing. Mottled petrel is slightly larger with a dark belly and whiter underwing.

Introduction of alien mammals is considered the primary cause of the Chatham petrel’s demise within the Chatham Island group. Following human colonisation, the species’ breeding range became restricted to a single predator-free location—Rangatira (South East Island). Here, their burrows are scattered thinly amongst millions of other seabird burrows in fragile, largely endemic, mature forest habitat.

Tracking of adults carrying dataloggers reveals that at-sea distribution changes during different stages of breeding, and that the species makes an extensive trans-Pacific migration. When breeding, they forage over deep waters, 2000–3000 km south-east of the Chatham Islands. During chick-rearing their foraging range, south of the Chatham Rise, is less extensive. After breeding, birds head east and north to ~1000 km from the coast of Peru and Chile. In spring, they depart the eastern Pacific ~3 weeks before arriving back at the colony.

The Chatham petrel is one of New Zealand’s most endangered seabirds with an estimated population of around 2000 birds, now increasing. There are around 200 monitored active burrows. Since 2003, 100−150 chicks have fledged annually.

The Chatham petrel was believed to be in decline before intervention in the 1990s. Research was initiated to locate burrows and determine causes for breeding failure. The species has since been intensively managed by the Department of Conservation to protect burrows from collapse, and to protect breeders and their vulnerable chicks from the robust and abundant broad-billed prion, another petrel species that competes for nesting chambers. Management improved breeding success from 30% of known breeding attempts producing fledglings, to 70–80% from 2000 onwards. The population then sustained a series of translocations to establish additional colonies of the species within the Chatham Islands. Four-hundred chicks were translocated from Rangatira over eight seasons (2002−2011) to two predator-free enclosures on Pitt and main Chatham Island. In 2012, 17 pairs were breeding on Pitt Island and the first second-generation birds, hatched and raised on Pitt, returned. On the main island, the first successful breeding event since pre-human times was also celebrated.

Successful breeding Chatham petrels stay together in long-term partnerships until one mate perishes or breeding attempts are disrupted. Pairs continue to use the same burrow, typically 0.5−1 m long, each season. Adults return to land in late spring to prepare nests. Established pairings often synchronise their arrival to within a few days.

After mating, the pair spends ~1 month at sea while the large (52 x 39 mm) white egg forms and the male conditions himself for the first incubation shift. The male then waits in the burrow for his mate to return and lay. They alternate incubation duty until the egg hatches 46 days later. Commonly, there are four shifts, with the female present at hatching; but, there may be up to five where the male attends the hatching egg. Parents brood the chick for 1−2 days, then leave it unattended, returning every few nights to deliver food. Chicks emerge from burrows for around 10 nights from mid-April, to exercise and find suitable take-off trees. Parents tend to abandon chicks by this stage, commencing migration while chicks are fledging from late April to June.

Chatham petrels are oceanic, only landing to breed, and arriving at and departing the colony during the night. They show strong site fidelity; the oldest known bird has bred in the same burrow for 24 years. Birds usually drop through the forest canopy within metres of their burrow. They are agile tree-climbers, scaling tall trees to exit the colony.

When not breeding, Chatham petrels forage mainly at night. When provisioning hungry chicks, birds are active at sea around the clock.

Non-breeders are known to be present at the colony in any month from November to May. Younger adults of ~2.5 years-old have been recovered towards the end of the season.

Chatham petrels feed mainly on squid and fish collected from within a few metres of the sea surface. Chicks are fed by regurgitation, and receive large volumes of semi-digested food and energy-rich pro-ventricular (‘stomach’) oil which is stored in their crop and slowly digested over many days.

A medium-sized gadfly petrel, dark-grey above and white below, with a mottled dark-grey and white forehead and a black diagonal bar that extends from the leading edge of the underwing to the diagnostic black ‘armpit’. The bill is black with a strongly hooked tip, the eyes are dark, and the legs and feet are pink.