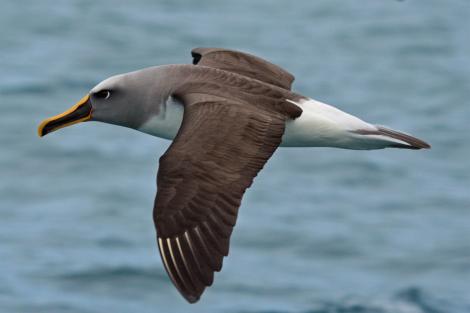 Buller’s mollymawks are one of the more abundant small albatrosses occurring around coastal areas of New Zealand, particularly from Cook Strait south. Their striking black-and-golden-yellow bill and smart black-and-white plumage make them readily identifiable as they scavenge close to fishing vessels. The southern subspecies is unusual among albatrosses in breeding under tall, dense woody vegetation which sometimes requires it to walk up to 100 m inland to reach its nest after landing in open tussock at the forest edge.

The Buller’s mollymawk is one of the smallest of the albatrosses. It is black across the upperwings, with a white lower back and rump and black tip to the tail. The underparts are white with a clear-cut broad black leading edge and narrow black trailing edge under the wing. The light-grey neck and throat contrast with the silvery-grey crown. The bill is black with golden-yellow top and bottom plates.

Voice: Buller’s mollymawks are usually silent at sea, though may give harsh croaking when squabbling for food. They utter a variety of brays, croaks and wails during courtship.

The southern subspecies breeds on the Snares Islands and the Solander Islands, with many of the nests under dense woody vegetation such as Olearia lyalli, Brachyglottis stewartiae and Hebe elliptica. During the breeding season it is commonly found in seas off the South Island and off south-eastern Australia, less often as far south as Macquarie Island and as far north as the Kermadec Islands. One was found ashore at Middle Sister Island, Chatham Islands. The northern subspecies breeds mainly in open areas on the Sisters and Forty-Fours, Chatham Islands, with a small population on Rosemary Rock, Three Kings Islands. It ranges mainly off the Chatham Islands and eastern North Island, but has been recorded in subantarctic seas. After breeding both subspecies migrate to the seas off Peru and Chile.

All breeding sites are free from mammalian predators, although an expanding New Zealand fur seal population at the Solander Islands may be affecting breeding success of those birds breeding on the lower slopes. Buller’s mollymawk is a common albatross species observed killed in the New Zealand fisheries, with demersal longliners and trawling operations responsible for the majority of mortalities.

Colonies can be densely packed or loose. Buller’s mollymawk are monogamous with shared incubation and chick care. The nest is a pedestal of mud, guano and vegetation accumulated from the immediate vicinity, and is used and added to year after year. The single large (104 x 64 mm) white egg is laid in October-November (northern subspecies) or January-February (southern subspecies) and hatches after 68-72 days. Chicks on the Snares Islands fledge when about 167 days old, mainly in August and September, with stragglers into October. Young are independent at fledging; they begin breeding when about 12 years old, and can live more than 45 years.

As a typical albatross, Buller’s mollymawks have perfected soaring flight. In strong winds they wheel effortlessly on their long, narrow, stiffly held wings. They use their webbed feet for swimming and as rudders when coming in to land. Their strongly hooked bills are used to grasp prey whilst the sharp edges of the upper mandible are used to slice it into manageable portions. However, albatrosses have a great capacity to extend the throat, and so swallow large pieces of food.

At their breeding colonies Buller’s mollymawks use an elaborate series of displays and calls to maintain their pair bond and to defend their nest pedestal. They are annual breeders that usually return to the same nest site year after year with the same partner. After breeding the colonies are deserted and the birds migrate across the Pacific to seas off Chile and Peru. Banding shows that 92-97% of adults survive from one year to the next. The oldest banded bird was estimated to be at least 54 years old.

Kingdom of the Birds: An expedition to Solander Island – Te Papa Channel

Robertson, C.J.R. 1991. Questions on the harvesting of toroa in the Chatham Islands. Science & Research Series 35: 1-105. Department of Conservation, Wellington.

A small albatross with light-grey neck and throat, silvery-grey crown, black across the upperwings, white lower back and rump, black-tipped tail, and a black bill with yellow top and bottom plates. The underparts are white with a clear-cut broad black leading edge and narrow black trailing edge under the wing.