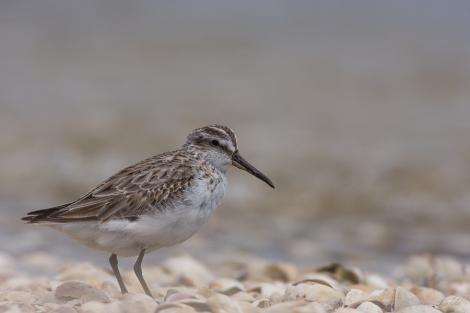 The broad-billed sandpiper is a small Arctic-breeding wader that migrates to South-east Asia and north-west Australia in the non-breeding season. It is between a wrybill and a red-necked stint in size, and the few birds that reach New Zealand usually associate with either or both those species. Broad-billed sandpipers have short legs, a squat body and a long heavy black bill which droops at the end like a dunlin’s. The best diagnostic feature is the pale double eyebrow (‘supercilium’) which meets above the bill.

The broad-billed sandpiper is a small migrant wader, slightly larger than a stint. It is most like a non-breeding dunlin, with the same heavy bill, drooped at the tip, giving a front-heavy appearance as though the bill is too long for the bird. The head, neck and upperparts are scaly brown-grey, with dark feather centres and paler edges. The underparts are mainly white, with dark speckling forming a light gorget on the breast. The diagnostic double supercilium is formed by parallel pale stripes above each eye, with a dark crown stripe between the two upper pale stripes. In breeding plumage this central stripe becomes black. A dark leading edge to the upperwing is apparent in flight, and there is a narrow white wingbar, and white sides to an otherwise blackish rump. The legs are greenish. Juvenile birds are much brighter, with rufous edges to back feathers and a prominent white V on the back feathers. Broad-billed sandpipers feed by vertical probing in mud and shallow pools, in a slower manner than stints.

Similar species: dunlin and western sandpiper (equally rare vagrants in New Zealand) have similar heavy bills, drooped at the tip, but have a poorly defined single supercilium and longer black legs. Western sandpiper is also smaller. Curlew sandpiper has a long bill that is decurved along the whole length, not just at the tip and has much longer legs than broad-billed sandpiper. It also lacks the striped head pattern, and has a white rump.

The broad-billed sandpiper is a Eurasian Arctic breeding species. The Eastern subspecies sibirica breeds in eastern Siberia and migrates to South-east Asia and north-western Australia. Very few come to New Zealand. They have been reported in North Island harbours, especially the Manukau and Firth of Thames every few years since 1960, but only in ones or twos.

Little is known about breeding ecology of broad-billed sandpipers. They breed in wet taiga bogs of northern Europe and Siberia, laying 4 eggs in a scrape on the ground.

A small wader with a slightly drooping heavy long black bill, brown-grey head, neck and upperparts with dark feather centres and paler edges, mainly white underparts with dark speckling forming a light gorget on the breast, double supercilium formed by parallel pale stripes above each eye, and a dark crown stripe in between.