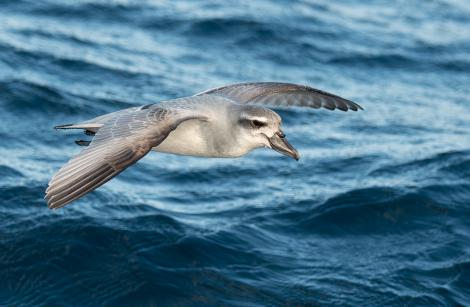 The broad-billed prion is the most distinctive member of the otherwise confusingly similar prion group of seabirds. With its bizarrely wide bill and high forehead, the broad-billed prion has an almost cartoon-like character when seen at close range. The broad bill is part of a suite of adaptations for feeding on minute marine organisms. Analogous with baleen whales, broad-billed prions have a fringe of comb-like filters around the upper mandible, a distensible pouch between the bowed lower mandibles, and a muscular tongue to force water out through the filters. These same features are present but not as far developed in the related Salvin’s and Antarctic prions. All six prion species look very similar at sea, being slightly smaller than a red-billed gull, blue-grey and black above, and white below. Broad-billed prions breed around southern New Zealand and in large numbers on the Chatham Islands. The southern populations were decimated by a winter storm in 2011, when an estimated quarter of a million birds were blown ashore and died, mainly on west coast beaches of the North Island.

All six prion species are all very similar in appearance and behaviour, differing mainly in bill shape. All are medium-small seabirds that are blue-grey above and white below, with a blackish ‘M’ across the back from wingtip to wingtip, a black tip to the upper tail, and blue bill, legs and feet. The broad-billed prion is the largest prion species, and has a bill that is both more massive (18.7-24.3 mm wide) and darker than all other prion species. The bill is lead-grey, shading to blue at the widest margins, and with a blue lower mandible. The broad-billed prion is also darker on the upper breast than other prions, with blue-grey tabs extending from the shoulders to almost form a collar.

Voice: broad-billed prions are silent at sea, but are vocal on the ground at night at their breeding colonies, giving harsh chattering calls and softer crooning. In dense colonies this can merge into a wall of sound.

Similar species: Salvin’s prion is the ‘next-broadest’ of the prions, and is sometimes known as the lesser broad-billed prion (bill 13.5-17.5 mm wide). It is a slightly smaller bird, with a bluer bill.

Broad-billed prions breed on many of the muttonbird islands in Foveaux Strait and around Stewart Island, and also on the Snares, Solander and Codfish Islands, and a few outer islands in Fiordland. The largest colony in the New Zealand region is on Rangatira Island in the Chatham Islands, and they also breed on many other islands in the Chatham Islands. Elsewhere, broad-billed prions breed in enormous numbers on Gough and Nightingale Islands in the South Atlantic, with smaller numbers on the nearby Tristan da Cunha and Inaccessible Islands.  They are most often seen over the open sea near breeding colonies, and do not enter sheltered coastal waters. Vagrants occasionally strand on Australian beaches, particularly in Tasmania, Victoria and New South Wales.

Most New Zealand colonies are under low forest or among dense ground cover. When at low densities the birds breed in caves and rock crevices, or in burrows around rock outcrops. At higher densities their burrows honeycomb the ground.

No-one realised how abundant broad-billed prions were in New Zealand until about 250,000 of them died during a severe storm in July 2011 – without any detectable decline in the largest colony on Rangatira Island, Chatham Islands. There are an estimated 300,000 pairs under forest on Rangatira Island, and probably a similar number in non-forested areas on the island. It is thought that the 2011 storm wiped out 80-90% of the southern New Zealand population (Fiordland-Foveaux-Snares), but there were few population estimates available other than the Snares Islands, where 2-5,000 pairs were estimated on the main island in the 1980s. The Gough Island population is estimated to be in the low millions of pairs.

Before the 2011 mortality event, the largest recorded wreck of broad-billed prions on New Zealand beaches was 1385 birds in 1961.

Broad-billed prions are abundant only on islands that lack introduced predators. Massive declines or local extinctions occurred on several islands following predator introductions or colonisations, including islands in Dusky Sound, Fiordland (following rat and stoat arrival), Herekopare Island (cat introduction), and Jacky Lee Island (weka introduction). Broad-billed prions should have benefitted from rat and weka eradications on several muttonbird islands off Stewart Island, but the 2011 mortality event (caused by a severe storm) will have set their recovery back by decades. Southern skuas take a heavy toll of broad-billed prions at many colonies.

Broad-billed prions are colonial breeders, nesting as monogamous pairs in short burrows or rock crevices, mainly on small islands. The single egg is laid from late August to mid September and hatches in late October to early November. Incubation is shared in shifts of 5-7 days, and both parents feed the chick by regurgitation right through to fledging. Chicks depart the colonies from mid-December to late January.

Broad-billed prions mainly occur in dispersed flocks at sea. They are not attracted to boats. Food items are mainly captured while sitting on the sea surface or hydroplaning – facing into the wind with wings extended, and dipping the head and neck into the upper 10 cm of the water column. They are non-migratory, staying in New Zealand waters throughout the year. Birds can be found ashore at colonies in any month of the year, but few visit for the 4-5 weeks after chicks fledged.

Broad-billed prions excavate their own burrows, or utilise caves and rock crevices. They visit breeding sites after dark and depart before dawn, or stay in burrows or nest crevices during daylight. On the Snares Islands, broad-billed prions occasionally fly over nesting areas in daylight.

Harper, P.C. 1980. The field identification and distribution of the prions (genus Pachyptila), with particular reference to the identification of storm-cast material. Notornis 27: 235-286.

Imber, M.J. 1981. Diets of storm petrels Pelagodroma and Garrodia and of prions Pachyptila (Procellariiformes). Pp 63-88 in Cooper, J. (ed.) Proceedings of the symposium on birds of the sea and shore. African Seabird Group, Cape Town.

Richdale, L.E. 1965. Breeding behaviour of the narrow-billed prion and broad-billed prion on Whero Island, New Zealand. Transactions of the Zoological Society of London 31: 87-155.

A large prion, blue-grey above and white below, with a high forehead, wide massive lead grey-blue bill, white eyebrow stripe, blackish ‘M’ across the back from wingtip to wingtip, black tipped upper tail, and blue legs and feet. It is darker on the upper breast than other prion species with blue-grey tabs extending from the shoulders to almost form a collar.