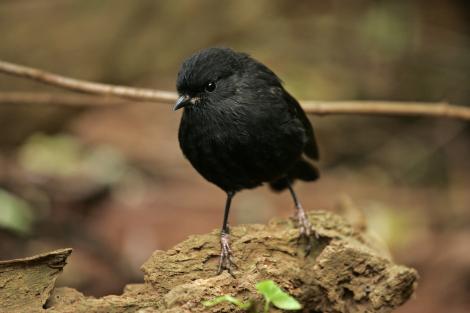 The black robin is endemic to the Chatham Islands where it is now confined to the southern extremity of its former range. It is a quiet, confiding forest-dweller, alert and almost always active in the lower forest strata. Birds are commonly attracted to human presence. The species is famous world-wide for its inspiring recovery from imminent extinction in the early 1980s.

Black robins are closely related to New Zealand’s other Petroica species (tomtit, and North Island and South Island robins). All are descended from Australian Petroica ancestors.

The black robin is a small, rotund bird intermediate in size and form between its tomtit and robin relatives. Both sexes are completely black at all ages, though juveniles have subtle pale streaking on the crown. Its tail, legs and bill are slightly longer and stouter than those of the Chatham Island tomtit with which it shares its range. Birds appear short and round through their habit of holding their large heads hunched close to their bodies. The sexes are indistinguishable to casual observation (weight and size ranges overlap).

Voice: a limited range of calls. Song, generally of 4-5 clear notes, is given mainly by males. It is not as rich or melodic as the calls of mainland robins. Males and females give a simple down-scale call, perhaps territorially. A single high-pitched note may be given in alarm or aggression. Contact calls when feeding resemble tomtit trills but are quieter.

Similar species: this is the only robin and only completely black Petroica species on the Chatham Islands. It shares its breeding and foraging ranges with the smaller Chatham Island tomtit.

Black robins originally inhabited the five major forested islands in the archipelago: Chatham (90,040 ha), Pitt (6325 ha), Rangatira (South East) Island (218 ha), Mangere (113 ha), and Little Mangere (9 ha). Human activities eliminated all original populations, the last in 1976 when the survivors were moved from Little Mangere to Mangere Island for conservation purposes. Descendants of these seven survivors have been returned to Rangatira Island, which, like Mangere Island, is a protected sanctuary.

The black robin breeds, forages and socialises almost exclusively within forest interiors. This habit is unique among Australasia’s temperate-zone Petroica. Birds are reluctant to venture outside forest perimeters and do not breed well in scattered or fragmented vegetation. The species favours large continuous tracts of forest with a closed canopy, mixed under-storey species and edges enclosed by dense sheltering vegetation. Optimum forest type comprises trees of complex structure, mixed height and age classes which offer abundant nesting and foraging opportunities.

The black robin is more extinction-prone than its Petroica relatives. Very low reproductive output, specialised forest-dwelling and foraging habits, narrow tolerances to habitat type and quality, and very limited powers of dispersal are key vulnerabilities. These traits exaggerate the effects of extinction pressures and suppress rebounds from population knock-downs.

Chronic inbreeding over more than a century and severe loss of genetic diversity further jeopardise resilience. Degrees of relatedness in today’s populations are among the highest recorded for any avian species in the wild. Inbreeding depression is expressed through lowered reproductive output. Long-term persistence of populations is uncertain.

Today’s populations are unnaturally small. Long periods of farming on both islands have reduced the extent of suitable forest cover available (about 8 ha on Mangere Island and 110 ha on Rangatira Island).

Conservation relies on quarantine of today’s small populations from predators, new pathogens and habitat loss. Genetic health is managed though increasing population sizes. Extinction risk will be reduced by translocating birds to new habitats within the Chathams.

Black robins breed annually in spring and summer. Cup-like nests are built in tree cavities or dense Muehlenbeckia vines, usually within 2 metres of the ground. Most clutches comprise two eggs (range 1-3). Only the female incubates but both parents care for the young. Pairs are capable of raising two clutches to independence per season (one is usual).

The breeding, foraging and social behaviour of the black robin resembles that of its Petroica relatives. Water and open spaces are barriers to movement, so that colonising of detached habitat is slow, and natural migration between islands does not occur. They have a patriarchal social system based on territories, which are defended most aggressively during breeding. Birds are monogamous and may mate for life. Site and pair fidelity is strong between years. Juveniles are usually evicted from territories in their natal season.

Black robins are always alert and active, moving about in brief direct flights. Birds forage diurnally in sub-storey vegetation and on the ground (usually pouncing from low branches, or flicking ground litter over with their bills). Large prey items (such as wetas < 20 mm) are thrashed against objects first to remove limbs. Unlike mainland robins, black robins do not cache food.

Black robins make a long parental investment in a few offspring, typical of the slow breeding strategies of temperate southern hemisphere birds. Reproductive output is the lowest recorded among known Australasian Petroica because clutch sizes are unusually small, the breeding cycle is long and the breeding season is shortened climatically.

Males live 4.2 years on average, slightly longer than females (3.7) but a very small number of both sexes may reach ages up to 14 years. Both can breed successfully as yearlings and in old age (≤ 11 years).

A small rotund songbird intermediate in size and form between its New Zealand tomtit and robin relatives, with both sexes being completely black at all ages, though juveniles have subtle pale streaking on the crown. The tail, legs and bill are slightly longer and stouter than those of Chatham Island subspecies of New Zealand tomtit, with which it shares its range.