Geographical variation: Seven subspecies have been named, with nominate minutus ranging from Papua New Guinea and northern Australia east to Samoa and the Tuamotu archipelago, including Lord Howe, Norfolk and the Kermadec Islands. 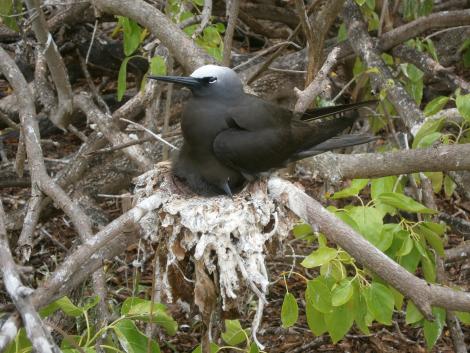 The black noddy is one of three dark noddy species, the others being the brown noddy and lesser noddy. Adult birds are sooty black with a white cap, the reverse of most terns, which are typically pale with a black cap. Black noddies are widely distributed in tropical and subtropical seas, other than Western Australia and the Indian Ocean, where it is replaced by the lesser noddy (A. tenuirostris). About 2,200 pairs breed in New Zealand at the Kermadec Islands. Stragglers rarely reach northern waters of the North Island, from the Three Kings Islands to Northland and Waikato. Black noddies are graceful and buoyant in flight. They have a long, slender, black bill that is about a third longer than the head.

The name noddy is derived from animated courting displays in which both birds repeatedly nod at one another.

The black noddy is a medium-sized sooty black tern with contrasting white head cap that grades into grey on the neck. It has a slender, sharply-pointed black bill, a white crescent below the dark round eye, and a white spot above it. The wings are long and pointed (66 - 72 cm wingspan), and the tail wedge-shaped. The short legs are red-brown to yellow-brown with dull orange or dull pink webbing. The sexes are alike. Juveniles have greyish feathers on the upper wings.

Similar species: the brown noddy is larger, heavier and browner, with a greyish-white cap, a shorter, stouter bill and pale central panels on the underwings.

The black noddy breeds in colonies on tropical and subtropical islands in the Pacific and Atlantic Oceans, and the Caribbean Sea. It breeds on sea cliffs, in caves, in trees and on shrubby vegetation, and on the ground, on both low-lying sandy atolls and high rocky islands. Outside the breeding season black noddies usually remain near nesting islands, but occasionally cross open sea to other islands. They forage in flocks over coral lagoons, coastal waters, and up to 80 km offshore. In New Zealand, black noddies breed at the Kermadec Islands on North and South Meyer Islets off Raoul Island, on L'Esperance Rock, and on Macauley, Curtis and Cheeseman Islands. Their non-breeding movements are poorly known, apparently being resident at some islands, and a seasonal visitor to others. Some Fiji breeders disperse west through the Solomon Islands. Black noddies rarely stray to mainland New Zealand waters, where there are about a dozen records from northern waters off the Three Kings Islands and Northland, and south to Farewell Spit.

The total global population of black noddies is estimated at 200,000 pairs, with 2,200 pairs breeding in New Zealand.

Introduced rats and feral cats extirpated black noddies on Raoul Island, and were in turn eradicated by the Department of Conservation in 2002. The global population appears to be stable with an expanding breeding range and population on islands of the Great Barrier Reef. Many other populations are declining or have been eradicated due to human hunting and habitat loss. Birds are harvested as food in Micronesia and Tokelau, and vegetation clearance has destroyed nesting habitat on other islands. Most populations on the Hawaiian Islands are protected and monitored; elsewhere in the region there have been few efforts to protect seabirds. Where laws exist that restrict or prohibit hunting or egg collection, enforcement is challenging or inadequate. The IUCN Red List classifies the black noddy as Least Concern. The Department of Conservation classifies it as naturally uncommon, range restricted, and secure overseas.

Black noddies are colonial breeders, with breeding dates varying between years at the Kermadec Islands. Courtship includes paired flights, mutual head nodding on the ground, and males courtship-feeding their mates. The single pale, streaked egg is laid August-January, mostly in October-November. The nest is usually a substantial scruffy-looking platform with a shallow depression in the centre, made of sticks, leaves and seaweed, held together with guano, and built in the fork of a pohutukawa tree or in ngaio scrub. Both adults incubate for 30 - 37 days and care for the chick. An adult guards the chick during the first days or weeks after hatching. The chick fledges 48-60 days after hatching, then returns to the nest to be fed by its parents for several weeks. There is a high rate of nest failure, but pairs are able to produce a second egg if they lose the first.

Black noddies forage during the day in small to large flocks of 20-3000 birds. They fly low over the water, hovering, dipping and pattering their feet on the surface, seizing prey while remaining airborne, or dipping the bill into water, usually without submerging. They are dependent on predatory fish, such as tuna, to drive prey species to the surface. Black noddies also pirate food from other seabirds. Foraging occurs by day and probably also at night, with peaks of activity at the colony in the early morning and evening. Black noddies roost at colonies during the middle of the day and during the night.

Black noddies feed on small fish and squid caught at the surface, and pirate food from other seabirds. They have been recorded eating caterpillars and juvenile sea snakes.

A medium-sized sooty black tern with contrasting white head cap that grades into grey on the neck, a slender sharp pointed black bill, a white crescent below the dark round eye, and a white spot above it. The wings are long and pointed, the tail wedge-shaped and the red-brown to yellow-brown legs legs are short.