Geographical variation: Over 30 subspecies worldwide. New Zealand birds are assumed to be of the Australian subspecies T.a. delicatula 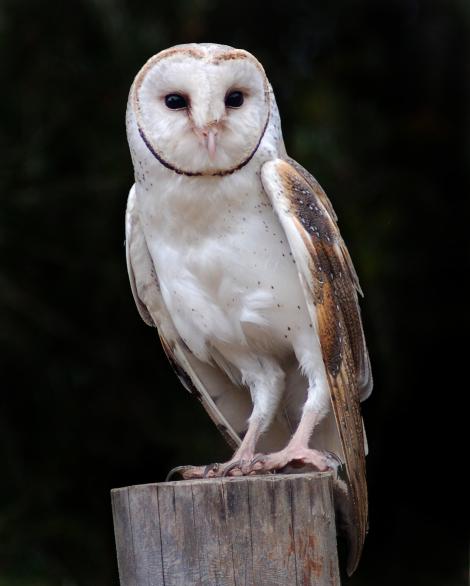 Barn owls are the most widely distributed species of owl in the world, breeding on all continents except Antarctica. Single birds have been recorded in New Zealand on a dozen occasions since 1947, and since 2008 a single pair has bred in Northland. The nearest populations outside of New Zealand are in Australia and the islands of the Southwest Pacific. Some barn owls are thought to have flown to New Zealand from Australia, while others are known or presumed to have arrived as stowaways on aircraft and ships.

The barn owl is a very pale, medium-sized owl with a distinctive white, heart-shaped face, black eyes and a pale bill. Its crown, nape, back and upper-wings are orangey buff and grey, delicately marked with white spots. The throat, breast and belly are white below with some dark spots. The long legs are fully covered with white feathers, down to the greyish toes.

Similar species: there are no other medium-sized pale owls in New Zealand, and so the barn owl cannot be confused with the smaller darker native morepork and the even smaller little owl. The barn owl’s loud hissing screech could possibly be confused with some brush-tailed possum vocalisations.

Barn owls are widespread on mainland Australia and on the islands of the Southwest Pacific.

In New Zealand they have been recorded at scattered locations throughout the country, particularly on the West Coast. They have arrived in New Zealand by a variety of means, including as windblown stragglers, and on aircraft and ships. Evidence of captive-bred cage escapees near Auckland during the 1990s, and the ability of barn owls to disperse widely, makes it difficult to deduce the origin of the pair established near Kaitaia. The Kaitaia barn owls nest in open woodland within an open grass farmland matrix. Their surrounding habitat consists mainly of long kikuyu grass dairy pasture with numerous drains. The adults and fledglings have been observed roosting in the small stands of native trees in the vicinity of the nest tree and up to 6 km away. The current nest tree entrance is c.11 m above ground level in an old puriri tree.

Wire fences and vehicle collisions are likely to be a threat to barn owls in New Zealand. In Kaitaia a recently fledged barn owl was found with a broken wing probably caused by a collision with a wire fence, and an adult bird found dead with lacerations to its wing, likely the result of barbed wire. When caught out in daylight, the barn owls in Northland have been harassed by magpies. Other threats include intensive farming practices in the vicinity of the nest tree, domestic and feral cats, swamp harriers, possums and mustelids, and the use of anticoagulant rodenticides. Wingspan Birds of Prey Trust has erected 12 nest boxes in the area to provide potential nest and roost sites for offspring from the pair. Potential risks to endangered native bird species if barn owls establish and spread in New Zealand have not been assessed.

Barn owls in Australia can be prolific breeders with eggs found at any time of year. In New Zealand in April 2008, an injured, fledgling barn owl was found in the vicinity of a known pair of barn owls. In June 2008, two dead chicks were removed from the nest cavity. One of these chicks was estimated at c. 56 days old showing that the nest had been initiated in early March. From observations of this pair of barn owls over five years, it appears they have bred at least twice a year since 2008. Fledged chicks have been observed within the vicinity of the nest tree in April, June, July, August, November and January. The number of fledged chicks observed at this site at any one time has varied from three to four.

The discovery of a second breeding pair of barn owls approximately 10 km from the first nest, along with recovery of five deceased barn owls in winter 2016 in Northland, and further reported sightings from the public, suggest that this species has an established and growing population in Northland.

In New Zealand, barn owls are mainly quiet and unobtrusive, but they are vocal during the breeding season when the male takes a prominent perch and gives an incessant screech for 15-20 minutes. Dependant juveniles are very vocal when the adults arrive with food. Foraging and roosting has been observed around cowsheds and poultry farms. Barn owls have a very buoyant flight and quarter over fields before hovering momentarily then dropping into long grass to seize their prey. They often perch on fence posts alongside grass roadside verges, listening for prey.

Barn owls are small rodent specialists but take birds also, depending on prey availability. Analysis of 18 pellets cast by the Kaitaia barn owls revealed they had consumed mice, rats and small birds, including house sparrow, greenfinch, yellowhammer, starling and a fernbird.

A very pale, medium-sized owl with a distinctive white, heart-shaped face, black eyes and a pale pinkish bill. The crown, nape, back and upperwings are orange-buff and grey with white spots, the throat, breast and belly are white with dark spots, and the long legs are fully covered with white feathers down to the greyish toes.