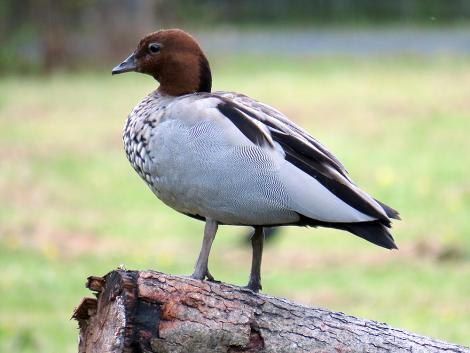 This rare vagrant to New Zealand has a distinctive dumpy goose-like appearance. Molecular genetic studies show that the Australian wood duck is related to shelducks (Tadorna spp.), not to pygmy-geese (Nettapus spp.) as previously thought from its outward appearance. Vagrants in much earlier times, perhaps during one of the Pleistocene glaciations, are thought to have given rise to the now-extinct New Zealand species, Finsch’s duck, Chenonetta finschi.

The Australian wood duck is a sexually dimorphic species, with males and females differing primarily in their head and underbody colour and patterns; the female is also slightly smaller. The adult male has a uniform dark-brown head and neck, with a short black mane down the back of the neck, hence the species’ other name: maned duck. The lower neck and upper breast are speckled brown and pale grey gradually fading to grey in the lower breast. The mantle and upper back are grey with a faint brown wash. The tail, undertail coverts, and belly are black. The flanks look grey from a distance but when seen close-up are finely vermiculated black on a grey background. In contrast, the female has a lighter greyish-brown head, with two pale grey stripes, one from just above the eyes back to the ear-coverts, the other below the eyes, extending from the base of the bill to the ear coverts. The lower neck, breast and flanks are spotted brown and white, the markings aligned in places, producing a barred appearance. The upper back is grey-brown, becoming darker brown further back. The upper tail coverts are pale brown tinged with grey; the undertail covers are off-white, the same colour as the belly. The tail is black-brown. Both sexes have the same bold wing pattern, with dark primaries that contrast with white secondaries, which create a broad white panel on the trailing edge of the inner upperwing. Males have a narrow speculum of iridescent green or indigo just in front of the white panel (this is brown and only slightly iridescent in females). Both sexes have dark brown-black scapulars that form a stripe on either side of the upper body, separated in turn from the dark central back by a narrow strip of grey body feathers (much browner in the female). Adult males have a non-breeding ‘eclipse’ plumage that is similar to the female plumage but with less distinct face markings. The bill is short and goose-like, quite deep at the base, grey in both sexes. The legs are grey, tinged light brown, occasionally greenish; the eyes are dark brown.

Voice: various nasal calls, most commonly a drawn-out mew or new given by female, and a shorter, wheezy wee-ow given by the male.

Similar species: none in New Zealand, although the striking white wing pattern of a bird in flight might be confused with paradise shelduck, which is bigger, darker, and has white scapulars not secondaries. The grey teal, which shows white on the secondaries above a large greenish speculum, is smaller, slimmer, and browner.

The Australian wood duck is an endemic Australian species, found most commonly along the southeast and eastern part of the continent and in Western Australia. During wet years, many birds move to central Australia to breed. Elsewhere in Australia it is a vagrant. Most New Zealand sightings have been at wetlands, including sewage ponds, rivers, estuaries, and small lakes. In Australia, wood ducks are quite terrestrial, often grazing on lawns and open areas with short grass close to rivers and billabongs.

There are accepted records of Australian wood ducks from Glendhu, Wanaka, Central Otago (1910); Orawia, near Invercargill, Southland (1944); Wairau River, Marlborough (1980); Snares Islands (1982-1986); Otapiri, Southland (May 2002); Nelson Sewage Ponds (June 2010); Bromley Sewage Works, Christchurch (January 2011); and Horseshoe Lake, Christchurch (May 2011). These last two or three records may be of the same bird. Several other records have yet to be submitted to the Records Appraisal Committee of the Ornithological Society of New Zealand. A few pairs hve bred near Waimea Inlet, Tasman, since 2015.

In Australia, most of the wood ducks banded and subsequently recovered had not moved far from where they were originally marked, but the species is known to be nomadic during exceptionally wet years, when large numbers move inland to breed along flooded creeks and billabongs. The farthest recovery of a marked bird was one shot in north central Queensland, 1720 km from where it was originally banded in south-western New South Wales 17 months earlier.

A medium-sized long-necked duck with a short grey bill. Males have brown heads, grey bodies, chestnut speckling on the breast, a black rump, tail and undertail, and a narrow speculum of iridescent green or indigo; females have a white stripe above and below each eye, grey back, brown barred flanks, black tail and white undertail, and a brown speculum.

Calls with darter and house sparrows in background