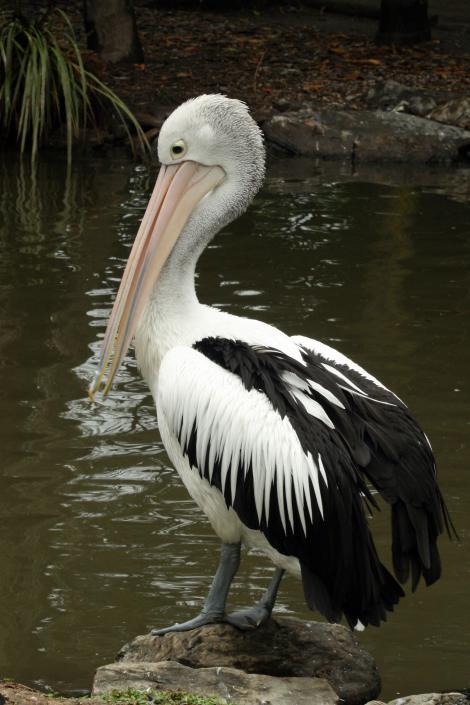 Pelicans are among the most recognisable birds in the world. The eight species occur in temperate and tropical regions, and are predominantly either white or brown. The white-and-black Australian pelican has the longest bill of any living bird.

Pelicans have reached New Zealand on five occasions since 1890, plus subfossil remains of at least 10 birds have been found; all are considered to have been vagrants from Australia. The New Zealand bones were initially named as of a new subspecies (New Zealand pelican P. c. novaezealandiae), which was later given full species status, but the bones are now considered indistinguishable from those of Australian birds.

A very large bird, weighing up to 13 kg, and with a wingspan of 2.5 m. The pink bill is very long (50 cm), with the lower bill supporting a distensible pouch for scooping up and holding food. The head and body of the Australian pelican is white, with a black back and tail. The upperwing is black with a white oval section in the middle of the leading edge; the under wing is white with dark flight feathers, plus a partial black bar in the midsection. The grey-blue legs are short for the bird’s size. The neck is folded back in flight. Pelicans use thermal currents to attain considerable height, where they can glide from thermal to thermal. They have been recorded at up to 3000 m altitude. They often fly in V-formation when in flocks. Juveniles are white and dark brown, with the brown feathers located where adults are black.

Australian pelicans are found throughout Australia except the central desert area. They also occur in parts of Papua New Guinea and Indonesia. They frequent canals, rivers, lakes and estuaries. Following heavy rains, Australian pelicans breed in thousands in previously dry inland lakes. They have been recorded from Palau, Norfolk Island, Fiji, Solomon Islands, Vanuatu and Nauru, as well as New Zealand.

First recorded at Jerusalem on the Whanganui River in 1890, with subsequent sightings on the Wairoa River near Dargaville (Aug-Sep 1976), Southland (one found dead, Nov 1977) and Canterbury (up to 4 birds, Dec 1977 - Jun 1978). At least 14 pelicans reached New Zealand in August 2012, where they were mainly seen on the Wairoa River, northern Kaipara Harbour, with individuals and smaller groups ranging between Parengarenga Harbour and the Whanganui River estuary. Eighteen were counted together in April 2013, and at least one bird was still present on the Kaipara Harbour as late as March 2015.

Usually found in flocks from a few birds to several thousand, occasionally as single birds. Pelicans can be found in residential areas as well as open country. Considered monogamous, with pairs bonding for each breeding season. Clutch size typically 1 to 3 eggs, occasionally up to 5. Nesting is in open areas where they tend to use a slight depression to build a nest of assorted materials in a circular platform. Pelicans are usually quiet both in flight and when at roost. The call has been described as a grunt or belching sound. They are more vocal when they are in breeding flocks.

Fish are the main food, but also crustaceans, insects and other small live animals including chicks of other bird species. When taking fish, they paddle forward with the bill open, plunge their head in and scoop up fish into their bill pouch. Pelicans often forage together in a line pushing schools of fish into shallow water where they surround the school and take turns scooping fish from the water.

A very large seabird with a 2.5 m wingspan, 50 cm long pink bill with pouch, white head and body, black back and tail and short grey-blue legs with large webbed feet. The black upperwing has a white oval section in the middle of the leading edge, the white underwings have dark flight feathers and a partial black bar in the midsection, and the neck is folded back in flight.