Geographical variation: Plumage does vary but this is not thought to be geographical. 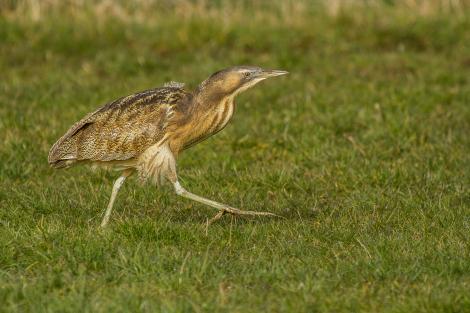 Bitterns are extremely cryptic and rarely seen. This is due to their secretive behaviour, inconspicuous plumage and the inaccessibility of their habitat. Their presence is most commonly discerned through hearing the distinctive ‘booming’ call of the males during the breeding season. Bittern occasionally show themselves in the open along wetland edges, dykes, drains, flooded paddocks or roadsides, often adopting their infamous ‘freeze’ stance, with the bill pointing skyward, even when caught out in the open.

Bitterns are large, stocky birds, with streaky dark-brown and beige plumage on their throat, breast, belly and thighs, with dark brown on the neck and back. The head is dark except for pale beige around the cheek, forming either a pale eyebrow or eye-stripe. Plumage varies greatly but this does not appear to be related to region, season or sex. Some variation is explainable by age, with juveniles possessing a ‘buffy’ mottled pattern on the primary feathers and yellow irises. Feather and iris colour gradually darkens from the shaft/pupil outwards as the bird matures, with adults possessing uniform copper-red irises and dark-brown (unpatterned) primaries. Birds may attain adult plumage by their third year, however, only a few birds of known-age have been followed to date making it difficult to confirm how quickly and consistently this transition in appearance occurs. Plumage of very old birds is thought to re-lighten but with white on the feathers rather than a buffy mottling.

Voice: male bitterns produce a sequence of distinctive ‘wooom’ calls known as ‘booms’. Each call sequence consists of several individual booms, ranging from 1-10 booms per sequence, with a mean of 3. These sequences are repeated at regular intervals that appear consistent to individual birds. The calls are assumed to be related to breeding as their production is almost entirely limited to the breeding season. Booms are commonly preceded or interceded with gasps or inhalations.

Females are largely silent, apart from producing a bubbling noise when they return to the nest, and a nasal ‘kau’ when alarmed. Birds in flight may produce a resonant or nasal ‘kau’ or ‘kau kau’. Chicks produce a bubbling ‘see see’ call on the nest.

Found throughout New Zealand, as well as parts of Australia and New Caledonia. A radio-tracking study on 10 adult male bitterns in the Hawke's Bay showed that birds utilised a network of wetlands, within a 15 km radius, seasonally. Sites regularly visited included raupō-fringed lakes, spring-fed creeks with cover and areas of rank-grass along paddock/drain edges. Studies at Whangamarino wetland, show bitterns mostly inhabit mineralised and semi-mineralised wetlands, although they also foraged in drains and wetland/farmland edges. Birds can travel long distances. Radio-tracking studies in Australia have shown that bitterns can move over 550 km within a very short space of time (11 days). However, radio-tracking studies in New Zealand suggest bitterns have smaller home ranges and make fewer long trips, than their Australian counterparts. The furthest a New Zealand bittern has travelled to date (2017) was 140 km (a juvenile female in the Canterbury region).

Estimates for the New Zealand population were as low as 900 individuals in the 1980s. Subsequent data suggests steep population declines at at least one former stronghold. Whangamarino wetland was thought to have as many as 145 bitterns in the 1980s, but more recent reports suggest < 15 males currently attempt to breed at the site now (suggesting an 89% decline over 35 years or 7% decline per annum). National population estimates for Australia are similarly low (fewer than 1000 birds), with declines of > 90 % being reported. New Caledonia has fewer than 50 birds.

Bittern numbers in New Zealand declined greatly following destruction of 90% of their wetland habitat to create farmland and towns. Ongoing habitat loss is still considered one of their greatest threats, although predators, poor water quality, and reduced food availability may have contributed to population declines. Recent radio-tracking studies have suggested that winter starvation many be contributing to population declines. Nest success, and chick/female survival is also suspected to be particularly low.

Few bittern nests have been found or studied. The nest is a platform of reeds built by the female among dense wetland vegetation, usually 20-30 cm above the water. The 3-5 eggs are laid between  August and December (peaking in November), and are incubated by the female alone for about 25 days till hatch. Chicks remain in the nest for about 7 weeks. Nestlings are usually reported between September and February, and fledge from November to May.

Bitterns are extremely sensitive to disturbance. When approached they either try to steal away silently before they have been detected, or adopt a still posture, commonly known as the ‘freeze’ or ‘surveillance’ pose. This stance involves standing with an erect neck and bill. It allows the bird to blend perfectly into most wetland environments, whilst maintaining good surveillance of its surroundings. If an observer continues to approach a bittern that is in freeze stance, the bird will eventually take flight laboriously, or occasionally will flatten its chest completely to the ground, using its superbly camouflaged plumage to blend into the background.

Foraging bitterns often stalk along wetland or water edges slowly, taking prey opportunistically. In areas where prey are abundant they have been observed slowly moving towards prey items until they are close enough to take their prey in a discreet, steady manner without needing to lunge or swipe. A bird’s ability to see and stab their prey is suspected to be important for bittern foraging and survival. This is a concern in New Zealand, as water quality and depths vary considerably, and are often artificially maintained as part of flood schemes, making bittern prey difficult to access seasonally at some sites.

A large, stocky heron with a thick neck, heavy yellowish bill and relatively short yellow legs. The beige plumage has dark brown streaking and mottling, and there is a buff eye-stripe on the mainly dark head.