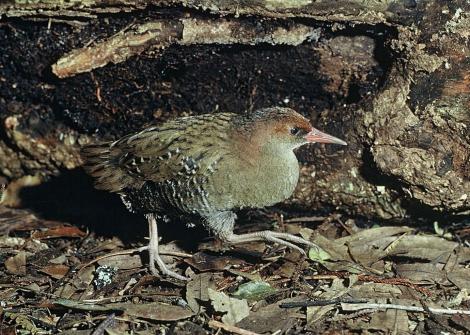 The Auckland Island rail is a small and extremely secretive rail known from only two islands in the subantarctic Auckland Islands group, where there are probably about 1500 birds. First discovered in the second half of the 19th century, the species went undetected between 1893 and 1966 when it was rediscovered on Adams Island. In 1993 it was found on Disappointment Island. It must have originally occurred on all the islands in the Auckland Islands group but vegetation changes caused by pigs and predation by cats has eliminated it from the main Auckland Island, and the former presence of cattle, rabbits and mice probably explain its absence from Enderby Island. It inhabits dense vegetation and is very secretive, but quite vocal – being much more often heard than seen. It is the only rail resident on the Auckland Islands and when a good sighting is made it cannot be confused with anything else. If however, it is only glimpsed (as it most often is) then it can be confused with the similar-sized subantarctic snipe.

Its closest relative is Lewin’s rail from Australia which is very similar in appearance but a little larger.

The Auckland Island rail is a small rail with a reddish-brown head and neck, brown and black back, grey breast, and black-and-white barred flanks and undertail. The bill is red with a grey tip and the legs are grey-brown.

Voice: a characteristic and loud kek-kek-kek…. call and a variety of quiet calls.

Similar species: the only species with which the Auckland Island rail might be confused is the similar-sized subantarctic snipe which occurs everywhere the rail does. The snipe has a much longer bill, a buff-and-brown striped head, and plain (unbarred) flanks and undertail. The snipe is less furtive and slower moving than the rail, and readily flushes if disturbed at close range (the rail never does).

On both Adams and Disappointment Islands they are most often found in dense vegetation about 1 m high comprising tussocks, large herbs and sedges, at sites from sea level to about 450 m a.s.l. On Adams Island they sometimes also occur in short (2.5 m high) forest which has a dense understory of ferns and sedges.

There are probably about 1500 Auckland Island rails, of which about 95% occur on Adams Island.

There are no threats to the rails on Adams and Disappointment Islands which have no introduced predators. However, rails have disappeared from islands in the Auckland Islands group that have (or have had) pigs, cats and mice, but it is not clear which of these introduced mammals was responsible for the rail’s demise. There is a risk that any of these mammals might eventually cross the narrow gap between the main Auckland Island and Adams Island and lead to the extinction of the rails there. There is also a risk that rats might arrive on the islands from an illegal landing or shipwreck.

The Auckland Islands are nature reserves with strictly controlled access.

Probably spring and summer breeders, though only one active nest has ever been found (in November). The only known clutch contained 2 eggs. Nests are woven of grasses and sedges, about 20 cm above the ground and concealed from above by vegetation.

Auckland Island rails appear to be territorial, sedentary and diurnal. They spend all their time in the cover of dense vegetation and very rarely fly.

A small rail with a reddish-brown head and neck, brown and black back, grey breast, and black-and-white barred flanks and undertail. The bill is red with a grey tip and the legs are grey-brown.

Calls from a captive bird