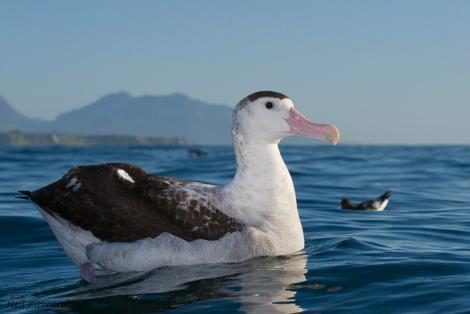 The Antipodean albatross is a large albatross that varies in colour from black-and-white to chocolate brown depending on sex, age and race. They breed almost exclusively on the Auckland and Antipodes Islands and forage over the continental shelf edge and deep water from south of West Australia to the coast of Chile, but are most common in the Tasman Sea and over the Chatham Rise east of New Zealand. Since 2003 a few pairs have started breeding on the Chatham Islands.

The Auckland Island subspecies (D.a. gibsoni) breeds only in the Auckland Islands group, with most (95%) of birds nesting on Adams Island and the rest on Disappointment and the main Auckland Island. It forages over the shelf edge and deep waters mainly in the Tasman Sea but ranges from 115° E in the west and 160° W in the east and from 30° S - 55° S in the north and south. The Antipodes Island subspecies (D. a. antipodensis) breeds almost entirely on Antipodes Island though a few pairs nest on Campbell Island and three pairs on Chatham and Pitt Islands in the Chatham Islands. It mainly forages over the shelf edge and deep water around the Chatham Rise, but it ranges as far east as South America and a few birds visit the Tasman Sea and the great Australian Bight. It forages as far north as 27°S, and as far south as 72°S.  Antipodean albatrosses come close to shore only at its breeding islands and where deep water occurs close to land , e.g., off Kaikoura. They follow boats and take discards and bait from hooks.

About 3200 pairs breed each year on the Auckland Islands and about 3700 on Antipodes Island. Since successful breeders only nest every second year the total population of breeding birds is about twice as large.

On the main Auckland Island pigs may take albatross chicks, but on other breeding islands (except Chatham and Pitt Islands, plus mice on Antipodes Island) there are no exotic predators. At sea their habit of following boats and taking bait from hooks has led to large numbers being killed in long-line fisheries, particularly the southern bluefin tuna fishery. During the 1970s and 1980s this probably led to a dramatic decline in numbers which slowed with the demise of the southern bluefin tuna fishery and improvements in bird bycatch avoidance techniques. Between 2005 and 2007 populations and breeding success at both the Auckland and Antipodes Islands dramatically declined - possible explanations for this decline include bycatch in a new swordfish fishery, but perhaps more likely are changing ocean conditions associated with global warming leading to reduced prey abundance. The conservation status of this species was moved from naturally uncommon to nationally critical in 2013.

Antipodean albatrosses lay a single egg between December and February and take a whole year to hatch the egg and raise the chick. Because of the long incubation and nestling period they can only raise a chick once every two years. The nest is a low pedestal built of soil and vegetation and sometimes lined with grass. Both members of the pair incubate the eggs and care for the young, taking shifts of up to 3 weeks while incubating.

Antipodean albatrosses, like all great albatrosses, are masters of low-energy flying, exploiting small updrafts created by wind and waves and rarely flapping their wings.  They cover large distances at high speed to find sparsely distributed prey and their principle foraging areas are at latitudes between 35 and 45°S.  They can only nest in predator-free, windy, treeless places, which necessitates them nesting at some distance from their main feeding grounds. Their squid and fish diet is mostly scavenged, either taken from the surface or from shallow plunge dives. They are attracted to boats in the hope of getting discards. They don’t start breeding till they are 7 to perhaps 20 years old and have an elaborate courtship lasting several years which initially involves a characteristic singing and dancing display. They form enduring pairs that mostly last until one or other dies. They are long-lived.