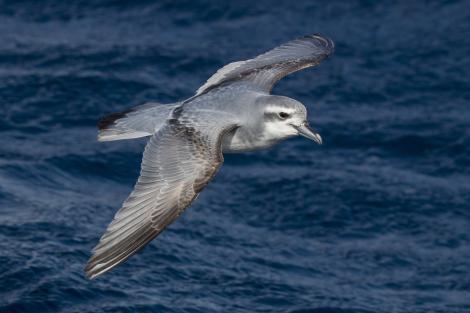 The Antarctic prion is an abundant small seabird of Antarctic and subantarctic waters south of 50° south. They are very similar in appearance to the five other prion species: blue-grey and black above, and white below, with blue bill and legs. The main New Zealand breeding colonies are on the subantarctic Auckland Islands, but they breed at many other sites around the Southern Ocean, including an estimated 22 million pairs on South Georgia. Antarctic prions, along with other prion species, are often found storm-wrecked on beaches in late winter, especially on the west coast of the North Island.

Within the New Zealand region, Antarctic prions are known to breed only on the Auckland Islands, but they are likely to breed on outlying islands and stacks around Campbell Island. Elsewhere, they breed in vast colonies on South Georgia, and also on South Sandwich, South Orkney, South Shetland, Crozet, Kerguelen, Heard, Macquarie and Scott Islands, and possibly at a few sites on the Antarctic continent. They nest in burrows under low forest or tussock, or in rock crevices. At sea, Antarctic prions mainly occur south of the Antarctic Convergence, including among pack-ice, north to 50° S south of New Zealand in summer. In winter they often wash ashore on west coast beaches as far north as Ninety Mile Beach, and occasionally on Raoul Island, Kermadec Islands, also east to Chatham Islands (including two birds caught at night there).

There are few claimed sightings of Antarctic prions off the New Zealand mainland, but this is partly due to the extreme difficulty of separating prion species at sea.

The New Zealand population has not been surveyed, and is roughly estimated at between 100,000 and a million pairs. Breeding has been recorded from Auckland, Adams, Enderby, Ewing and Ocean Islands in the Auckland Island group, but is likely to occur on other islands there also (e.g. Disappointment and Rose Islands). The world population is many millions of pairs, with 22 million pairs estimated for South Georgia, and 2-3 million pairs at Kerguelen Islands.

Not studied in New Zealand. On Signy Island, South Orkney Islands, Antarctic prions breed in large colonies. They return in late October, lay in mid to late December, and the young depart from mid March to early April. Like other prions and petrels, the adults are monogamous and share incubation and chick care. Incubation of the single white egg takes 44-46 days, and chicks fledge at 45-55 days old.

Antarctic prions often occur in large flocks at sea, sometimes mixed with blue petrels and other prion species. They are generally not attracted to boats, but will fly alongside large vessels. Food items are mainly captured by shallow dives or surface-seizing while hydroplaning – facing into the wind with wings extended, and dipping the head and neck into the upper 10 cm of the water column.

Antarctic prions visit breeding sites after dark and depart before dawn, or stay in burrows or nest crevices during daylight. Large numbers are killed by subantarctic skuas. Flocks disperse widely around the Southern Ocean after breeding.

A medium-sized prion, blue-grey above and white below, with a blackish ‘M’ across the back from wingtip to wingtip, a black tip to the upper tail, blue-grey bill, and blue legs and feet. In the hand, the bill is brighter blue with relatively straight sides when viewed from above, and lamellae (comb-like filters) not visible from the side when the bill is closed.