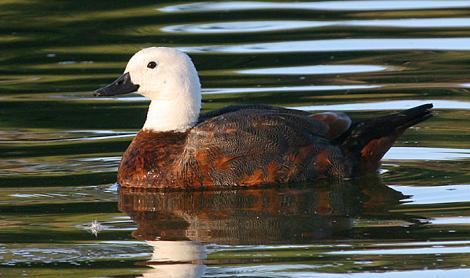 The paradise shelduck is a colourful, conspicuous and noisy waterfowl that could be mistaken for a small goose. It has undergone a remarkable increase in population and distribution since about 1990, including the colonisation of sports fields and other open grassed areas within urban environments. This expansion has occurred in the face of being a gamebird and hunted annually.

The paradise shelduck is a conspicuous and colourful species with contrasting male and female plumages. Between a large duck and a small goose in size, the male is uniformly dark grey or black while the female body is a dark or light chestnut (depending on age and state of moult). The male’s head is black with occasional green iridescence and the female’s head and upper neck is white. Both sexes have a chestnut undertail, black primary wing feathers, green secondary wing feathers and a conspicuously white upper wing surface. Variable amounts of white may occur on the heads of males during the eclipse moult (February-May) and newly-fledged juvenile females may retain an extensive black head with a white face patch until they complete their post-juvenal moult (by May). The bill, legs and feet are dark grey/black. Down-covered ducklings appear initially as “mint humbugs”, patterned brown-and-white. The first feathers are dark, and near-fledged ducklings of both sexes resemble the adult male.

Voice: the male paradise shelduck gives a di-syllabic goose-like honk when alarmed, or in flight. The main female call is more shrill, and more rapid and persistent, particularly during flight. There are a variety of other calls associated with pair formation and maintenance, territory defence, and maintaining contact with flock birds.

The paradise shelduck is New Zealand’s most widely distributed waterfowl, when both geographic spread and habitat use are taken into account. It occurs on North, South and Stewart Islands, all large near-shore islands with grassland (e.g. Kapiti, Great Barrier, D’Urville) and has straggled to distant Raoul and Lord Howe Islands, and to the Chatham Islands from which an as-yet unnamed shelduck species was exterminated by the first Polynesian settlers.

Paradise shelducks occur throughout the pastoral landscape, whether high country or lowlands, on river flats in mountain areas, at heads of protected bays or fiords, around the shorelines of all large lakes and hydro-dams, and increasingly on recreational grasslands and parks within urban areas.

The paradise shelduck is the second-most abundant waterfowl in New Zealand (after mallard). Its numbers are still increasing despite being a gamebird and at least 200,000 being shot annually (2011 figures). The total population probably exceeded 6-700,000 birds in 2011.

The paradise shelduck is so widespread and abundant as to be without conservation threat. Excessive hunting in the past severely impacted numbers, and 2-3 decades of cautious exploitation was required to restore their abundance and expand their distribution.

When aggregated in large flocks, especially on pastures alongside moult sites or on newly-sown pasture, the grazing impacts of paradise shelducks are regarded as intolerable by farmers. Occasional culling, or harassment of flocks generally alleviates this problem.

Paradise shelducks disperse as territorial pairs for breeding, and pairs occupy their territories year-round except when at a communal moult site. Hence birds are invariably seen as single pairs. Pair bonds may persist for several years but are regularly challenged by unpaired individuals. Territories usually contain some water body on which the brood will seek refuge. However, broods can be raised in wet areas without access to open water.

Females prospect potential nest sites within or beyond the territory in tree holes or bases, rock crevices, under buildings or debris piles and will use almost any site that confers overhead cover and has just a single entrance. Egg-laying is usually in August and September but young birds and some repeat nesters will lay in October, but rarely later. Clutches of 5-15 are reported but most over 12 will have been contributed to by two females. Incubation is by the female only and takes 30-35 days. Both parents guard the ducklings for 55-65 days until able to fly. Parents will perform a broken-wing display to distract mammalian predators and sometimes people. Some broods may amalgamate. The family may remain together for several weeks thereafter, with the bond broken when the parents depart for the communal moulting sites.

Populations are structured as territorial breeding pairs and flocks, the latter comprising mostly first-year and some second-year pre-breeders. Flocks mostly inhabit extensive river-side pastoral flats or expansive areas of young grass. The annual communal moult extends over January-March. Birds gather in large numbers around isolated or large ponds or lakes, or on expansive riverbeds, to shed all wing feathers.

Paradise shelducks are generally herbivorous, with a preference for pasture grasses and clover. An extensive diet has been recorded that embraces a broad range of leaves and seeds of terrestrial herbs, some aquatic plants, and terrestrial and aquatic invertebrates.

A large goose-like duck with rich chestnut, black and white plumage and grey-black bill and legs. Both sexes have a chestnut undertail, black primary and green secondary wing feathers, and a white upper wing surface; males have a dark grey or black body and head while females are rich chestnut brown with a white head and upper neck.