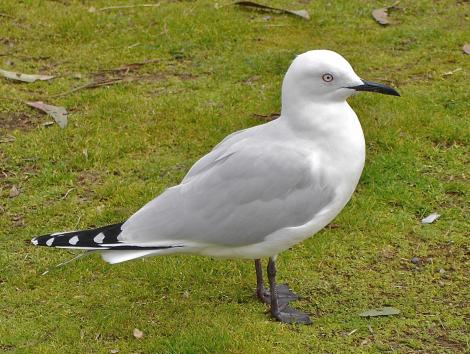 Although the black-billed gull is still relatively abundant, numbers of birds throughout the South Island have rapidly declined. Nevertheless, colonies can still number in the thousands. The black-billed gull is found only in New Zealand, unlike our two other common gull species. They are less likely to be found in towns and cities than the other gulls, and are not commonly observed scavenging for food. Interestingly, though declining overall, the black-billed gull has expanded its breeding range in the North Island in the last few decades, and now breeds as far north as the Kaipara Harbour.

The black-billed gull is more slender than the red-billed gull, with a longer bill. Breeding adults have a white head, neck, rump, tail and underparts, and pale silver-grey wings and back. The outer primaries are mainly white with white-tipped black margins. A diagnostic white leading edge to the wing shows in flight. The bill and legs are black; during late incubation and hatching the legs become vibrant blood red. The eye is white, and the eye-ring red. Non-breeding adults have a bi-coloured bill, reddish at the base with a black tip and line through the middle. During autumn-winter, all ages may have a grey patch above, below and in front of the eye. Immature (2nd year) birds have a grey eye, black eye-ring, bi-coloured bill (pinkish red with dark grey-black tip and line through middle) and pinkish-red legs (some almost orange). Juveniles have variable amounts of grey-brown on the crown and ears, lost during late summer-autumn.  The tail is white, sometimes with a grey-brown subterminal band. The wing is pale silver-grey with brownish terminal margins; large brown-black tips to the tertials and a dark carpal bar are retained through the first year. In flight, juveniles have a dark trailing edge to secondaries and white-tipped primaries. The black outer webs of the primaries are variable, distinctly darker than adults, thus the predominantly white leading fore edge of adults is absent. The bill is bi-coloured, dull pale pink with a dark grey-black tip; the eye is black, the eye-ring is grey-black and the legs are dull pale pink.

Black-billed gulls mostly breed on sparsely-vegetated gravels on inland riverbeds. The majority of the population nests in Southland, with only c.5% nesting in the North Island. In Southland, colonies are found on braided rivers through to single-channel rivers and streams with gravel beds. Occasionally birds resort to nesting on adjacent farmland after major flood events. In the North Island, the most well-known colony is at Sulphur Bay, Lake Rotorua. Elsewhere in the North Island, black-billed gulls nest at a range of sites including inland rivers, coastal shell banks, sandspits, and even locations such as lake-side marinas, hydroelectric dams and busy ports. After the breeding season, most South Island birds migrate to the coast, though movement patterns are poorly known.

An extensive national survey of black-billed gull colonies was undertaken in 2016-2017, mostly using aerial photographic counts of nests. The survey identified 60,256 nests; of these, 55.9% were in Southland, 4.6% in Otago, 34.3% in Canterbury, 0.6% in Marlborough, 0.3% in Tasman, 2.6% in West Coast, and 1.6% in the North Island. Surveys of Southland’s main rivers began in 1974, and an analysis of Southland data completed in 2008 revealed a population decline in excess of 80% in 30 years. The decline was greatest on the Oreti River, Southland (97% in 33 years), which once supported the largest known colonies recorded in New Zealand. More recently, statistical modelling of over 50 years of black-billed gull counts on 30 rivers in Canterbury, Otago and Southland showed that the Southland decline was largely mirrored in the other two regions, though to a slightly lesser degree, and predicted an overall decline of over 70% in the next 30 years. Colonies in Southland and Canterbury often number more than 1,000 birds. Occasionally ‘super colonies’ form, such as on the Ashburton River in 2014 and 2017, and on the lower Rangitata River in 2015, which number well over 10,000 birds. Black-billed gulls continue to expand their distribution in the North Island, and now breed in the Kaipara Harbour. However, there is no evidence for an overall increase in the North Island population.

Black-billed gulls are affected by a wide variety of threats. Introduced predators such as cats, stoats, and ferrets take eggs, chicks and adults, and native swamp harriers and southern black-backed gulls take eggs and chicks. In Southland rivers, colonies nesting on islands have better nesting success than colonies nesting on banks, presumably because predatory mammals cannot reach them as easily. Southern black-backed gulls can cause abandonment of smaller colonies through harassment and predation. Weed encroachment on riverbeds has removed suitable breeding habitat on some rivers, and can force birds to nest closer to the water’s edge, making nests more vulnerable to flooding. Black-billed gulls may be susceptible to changes in agricultural practices, such as intensification of farming and extensive use of herbicides and pesticides. Thousands of gulls may have died in Southland during extreme droughts in the 1970s and the heavy snowfall of 1996, apparently due to pasture invertebrates becoming inaccessible for extended periods. Human impacts at breeding colonies can also be significant. In recent years, vehicles have been driven through a number of colonies, killing eggs, chicks, and even adults, and large numbers of adults have been shot. During the non-breeding season, the population may be affected by changes in the availability of marine food sources caused by oceanic warming, particularly off the Kaikoura coast. The conservation status of this species was changed from Nationally Critical to At Risk / Declining in 2021.

Colonies are established in August-September, and are abandoned at the end of the breeding season in December to February, or occasionally earlier in response to floods, and predator or human disturbance. Mean nest density in Southland colonies is 1.2 nests/m2, and can reach 4-5 nests/m2 in dense colonies. Pairs mostly lay two eggs, though clutches of four or even five have been observed. Eggs are incubated for 20-24 days, and chicks fledge at approximately 26 days.

Black-billed gulls nest in noisy, dense colonies, mainly on riverbeds. They almost never nest as isolated pairs. Colony locations often change from year to year, and rivers in Southland can have 1,000 nests in one year, and 10,000 the following year. During the breeding season, birds feed at the river’s edge, or take insects on the wing over the river, but they are much more likely to be observed following ploughs on farms adjacent to the river, sometimes flying tens of kilometres for food. On rare occasions, black-billed gulls can be seen hawking for insects over tussock grassland or beech forest.

A medium-sized white gull with pale grey wings and back, white-tipped black margins to the main flight feathers, white iris, red eye-ring, black legs and a relatively long straight black bill. Non-breeding adults have a bi-coloured bill, reddish at the base with a black tip and a line through the middle.