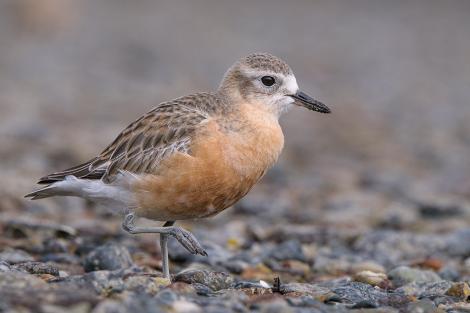 Coastal development and human recreational activities on beaches are having a growing impact on the northern subspecies; dotterels are often described as ‘appealing’, and local communities are increasingly championing them – providing advocacy and organising protection programmes to improve breeding success.

The New Zealand dotterel is a heavily-built plover, and is the largest species in the genus Charadrius (c.31 species). The upperparts are brown, darker in the southern subspecies, and the underparts are off-white in autumn-early winter, becoming orange-red (also darker in southern birds) from about May onwards. The depth and extent of red colour varies individually and seasonally, but males are generally darker than females. The bill is heavy and black, and the legs mid-grey. First-winter birds have pure white underparts, with legs yellowish to pale grey.

Voice: the common call is a sharp chip, often heard before the bird is seen. The call indicates alertness, with the rate increasing as the perceived threat level rises. The same call is also used to maintain contact. A high-pitched tseep is used to warn chicks to stay hidden. A long rattling churr is used when chasing intruders. A sharp werr-wit is used during territory boundary disputes.

New Zealand dotterels are found on or near the coast around much of the North Island. They are sparse on the west coast from about Taharoa north to North Cape, and there are a few isolated pairs in Taranaki. The bulk of the population is on the east coast between North Cape and East Cape. It has spread south of East Cape since 1990, but is still thinly spread in that area. In 2012, a pair bred at Riversdale (northern Wairarapa), the most southerly breeding record for the subspecies. Subsequent records further south have included at Tora and Baring Head.

New Zealand dotterels were previously throughout the South Island, breeding inland and wintering on the coast. Breeding is now confined to Stewart Island. Most birds winter on the island, but one flock is at Awarua Bay, Southland. A few juveniles wander the South Island coast, and are frequently recorded as far north as Farewell Spit, with one bird travelling as far as Auckland, before returning to Stewart Island.

There are major differences in breeding habitat between the two subspecies. Northern birds mainly breed on sandy beaches and sandspits, some on shell banks in harbours, a few on gravel beaches. On beaches, they are usually clustered around stream-mouths. In urban areas (particularly Auckland) they often breed a short distance inland on short grass (golf courses, motorway verges, beside airport runways) or on bare ground (building sites, quarries). Southern birds breed on exposed subalpine herbfields and rocky areas above the tree-line on Stewart Island, but are coastal during the non-breeding season, feeding on inter-tidal mudflats and beaches.

A total of 2075 northern New Zealand dotterels was counted in the 2011 breeding-season census.

Southern New Zealand dotterels reached a low of 62 birds in 1992, but they responded well to management, and the post-breeding population fluctuated between 240 and 290 birds from 2005-2013. Since then, there has been another decline, and in 2015 there were fewer than 200 birds. The reason for the recent decline is unknown.

Breeding success of Northern New Zealand dotterels is usually low at unmanaged sites. The main threats are loss of eggs and chicks to mammalian and avian predators, disturbance from human activities on beaches, loss of nests to big tides, and loss or degradation of habitat from development. Protection programmes began in the 1980s, and normally include predator control, fencing of nesting areas, appointment of wardens to reduce disturbance, and advocacy. About 20-25% of the population is now managed, but effort and success vary between sites and years. The subspecies is conservation dependent – stable or declining where unmanaged, increasing where managed.

Southern New Zealand dotterels were extirpated from the South Island by about 1900 following introduction of stoats and other mustelids. There was a rapid decline of the relict population on Stewart Island from the 1950s due to predation of adults by cats (and possibly rats). Males incubate at night, and are more vulnerable; a severe gender bias developed, with female-female pairs forming. The population was reduced to 18 male-female pairs by 1992, when cat and rat control was initiated. The population has since recovered, but its breeding range remains confined to Stewart Island, and it is conservation dependent.

New Zealand dotterels breed in monogamous pairs, and vigorously defend territories against other dotterels. The nests of northern New Zealand dotterels are simple scrapes in the substrate, sometimes sparsely lined or decorated, often with a marker of driftwood or vegetation. Three eggs are laid, usually from August or September, and are replaced if lost. Incubation usually takes 28-30 days; the fledging period is variable, but averages about 6 weeks. Double-brooding has been recorded but is not common. In both subspecies, female-female pairs occasionally form and lay combined clutches numbering 4-6 eggs.

Nests of southern New Zealand dotterels are usually hollows in cushion plants or between rocks; they are extensively lined, commonly with tussock tillers. They typically nest later then northern birds, from October. Incubation and fledging times not well known; limited data suggest these are similar to those of the northern subspecies.

Both subspecies form post-breeding flocks, typically at large estuaries. They gather from January, and numbers peak in March. Some northern birds move back to breeding sites from May, with all gone by August. Flocks of the southern subspecies stay together throughout winter.

New Zealand dotterels undertake distraction displays to lead intruders away from nests and chicks; include ‘rat-runs’ and injury-feigning. Small chicks crouch and ‘freeze’ when danger threatens; older chicks typically run to the nearest cover and hide. Juveniles often wander widely before settling to breed. Once established on a territory, they are usually faithful to breeding and flock sites, moving predictably between them. Mate-fidelity is high, but divorces have been recorded.

New Zealand dotterels consume a wide range of suitably-sized marine, littoral, and terrestrial invertebrates, and occasionally small fish. Sandhoppers are a common prey item on beaches, and small mussels are taken from rocks. Small crabs and annelid worms are among prey on estuaries; on grass, crickets, flies, beetles, and earthworms have been recorded. Most prey is live, but recently-dead items are occasionally scavenged.

Dowding, J.E. 1994. Morphometrics and ecology of the New Zealand dotterel (Charadrius obscurus), with a description of a new subspecies. Notornis 41: 221-233.

A bulky plover with a heavy black bill, relatively long grey legs and large round dark eyes. The upperparts are brown and the underparts off-white, becoming orange-red from May, with the depth and extent of red varying individually and seasonally, and males generally being darker than females.