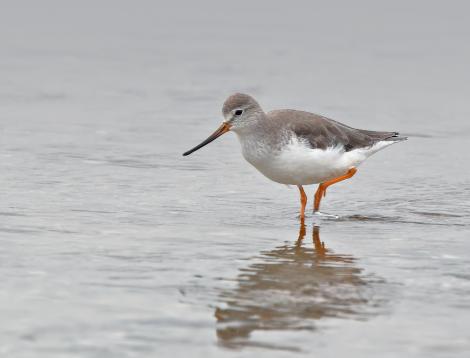 Terek sandpipers are an exception among small sandpipers in that they are easy to identify. No other small wader has a long up-curved bill, and few have bright yellow or orange legs. The few Terek sandpipers that reach New Zealand often associate with wrybills. These small plovers are typically very accepting of close observation, which makes it easy to get a good look at a Terek sandpiper, as they adopt the calm demeanour of the surrounding flock. The name ‘Terek’ is from the Terek River in the northern Caucasus, which flows through Georgia and Russia into the Caspian Sea.

The Terek sandpiper is a small grey-brown wader with short, conspicuously yellow or orange legs, and a long upturned bill. In flight, a thin white trailing edge shows on the upperwing.

Similar species: the Terek sandpiper is quite unlike any other wader. Bar-tailed godwit and common greenshank have slightly upturned bills, but both are much larger and much longer legged. Red-necked avocet has a very obvious upturned bill but it is much larger, and black-and-white with a reddish brown head.

The Terek sandpiper breeds in the boreal taiga zone of Eurasia, from Russia to the Russian Far East. In the non-breeding season, they are widespread on coasts throughout much of Africa, Arabia, southern India, South-east Asia, Indonesia and northern and eastern Australia.

The population of the East Asian-Australasian Flyway is estimated at 50,000 (Wetlands International 2012). It is unclear how many Terek sandpipers now reach New Zealand. They were regular visitors in low numbers through to the 1980s, with up to eight at a time occurring at favoured sites (especially Kaipara Harbour, Miranda and the Manukau Harbour). As they were regularly present and easy to identifiy, bird watchers tended to take them for granted, and rely on biannual wader counts to monitor their numbers, rather than submitting sightings to the OSNZ Rare Birds Committee (now Records Appraisal Committee). Terek sandpipers are now a much rarer bird in New Zealand, and probably no longer reach New Zealand every year. They have been found from Northland to Southland, usually among flocks of wrybills or other small waders. Other sites with multiple records include Parengarenga Harbour, Manawatu Estuary, Farewell Spit, Lake Ellesmere and Awarua Bay.

About 25% of the East Asian-Australasian Flyway Terek sandpiper population stages in the Yellow Sea on northward migration  – an area under severe threat from reclamation and pollution.

Terek sandpipers nest on the ground in short vegetation, in a scrape lined with plant material and debris. The usual clutch is 4 eggs.

Terek sandpipers forage by pecking at the surface, jabbing and probing. At times they have a characteristic way of foraging, approaching prey  by running with the head held low in front of the bird. Occasionally they may feed like an avocet, moving the head from side to side with the bill in shallow water.

During the non-breeding season, Terek sandpipers mostly feed on crabs, but they also take amphipods, and flies and other insects.

A small darkish grey and white wader with short yellow-orange legs and a long upturned yellow bill that becomes dark in non-breeding condition. The upperparts are darkish grey, the underparts white, and a thin white trailing edge shows on the upperwing during flight.

Song from bird on migration