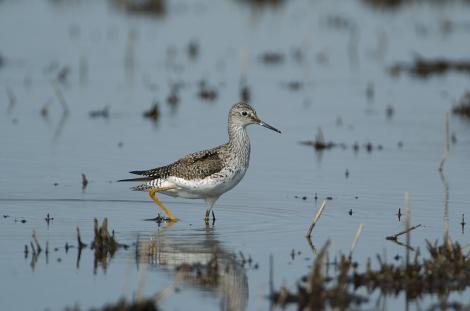 The lesser yellowlegs is a slender, elegant wader, similar in size to a marsh sandpiper but with yellow legs. It is a rare vagrant to New Zealand with fewer than 20 records, the last being in 2004. Lesser yellowlegs breed in North America and migrate to Central and South America and are found in many types of wetlands.

The lesser yellowlegs is a medium-sized long-legged, slender wader. In breeding plumage the upperparts are mottled grey-brown, white, and black, and the underparts are white with brown streaking on the neck and breast and blackish barring on the flanks. In non-breeding plumage, the upperparts are uniform grey-brown with pale spots, and the underparts are white with fine streaking on the neck and breast. The plain grey-brown upperwings and back contrast with the white rump in flight. The bill is slender, dark and about the length of the head. The sexes are alike.

Voice: a whistled tew-tew or tu-tu, similar to greater yellowlegs.

Similar species: In New Zealand the closest species in size and general appearance is the marsh sandpiper, which has greenish legs and a white V extending up the back in flight. Wilson’s phalarope has shorter legs, an unusual pot-bellied physique, and has a bolder white eyebrow contrasting with a dark stripe through the eye. Other similar species have not been recorded in New Zealand, including greater yellowlegs (T. melanoleuca), which is 25-30% longer and has a thicker base to the bill, which is about 1.5 times the head length. Solitary sandpiper (T. solitaria) is darker above with greenish legs. Wood sandpiper (T. glareola) has greenish or brownish-yellow legs and a high-pitched call.

Lesser yellowlegs breed in marshy, boggy habitat known as muskeg, across North America from Alaska to Hudson and James Bay in Canada. In the non-breeding season they are found from southern USA, right through Central America and across most of South America. They use a wide range of wetland habitats from coasts to mountains. The lesser yellowlegs is a rare vagrant to Australia and New Zealand.

The identity of the first yellowlegs recorded in New Zealand (lesser vs greater), at Porirua Harbour in November 1962, was much debated before it was accepted as a lesser yellowlegs. This is supported by the subsequent records of at least 17 lesser yellowlegs with, as yet, none of the larger species. Most records are from coastal wetlands around harbours and estuaries from Manukau Harbour south to Washdyke and Wainono lagoons. There are two inland records (Lake Pukepuke, March-April 1974; Wanstead lagoon, Waipukurau, January 2004) and one from Te Whanga Lagoon, Chatham Island (November 1985). A few favoured locations have been visited on multiple occasions: Ahuriri Estuary, Hawke’s Bay (November 1963, April 1973, February 1983, January 1994), Wainono (February-March 1972, November 1987) Manukau Harbour (October 1973 - March 1974, October-November 1987), Farewell Spit (March 1974, January 1977). Other accepted sightings have been at Porirua Harbour (November 1962), Lake Ellesmere (January 1964), Washdyke Lagoon (February 1971), Lake Wairarapa (January 1983), and the Avon-Heathcote Estuary (October 2002). All New Zealand records have been of single birds.

The global population of lesser yellowlegs is estimated at 500,000 birds and is known to be declining, although not at a fast enough rate to be of immediate concern. It is classed as of Least Concern by IUCN.

Lesser yellowlegs are safe from habitat loss during breeding as they breed in areas with low human population. They are also more secure than many wader species when on migration and on non-breeding grounds, as they use a wide range of habitats across a vast range, and are not concentrated at key staging sites during migration.

Lesser yellowlegs breed May to August, tending to nest in loose colonies in open boreal forest with scattered muskeg. The clutch size is usually 4. Chicks leave the nest soon after hatching and feed themselves on insects and insect larvae.

The lesser yellowlegs is a middle to long distant migrant within the Americas and it is unclear which route vagrants take to reach New Zealand but possibly via Asia, as it is a vagrant in Siberia and Japan. However, it is also a rare vagrant to Hawaii and French Polynesia so an oceanic route can’t be ruled out.

A medium-sized slender wader which in non-breeding plumage has uniform grey-brown upperparts with pale spots, white underparts with fine streaking on the neck and breast and plain grey-brown upperwings and back contrasting with the white rump in flight. The long legs are yellow and the slender straight bill is dark.

Calls from group in flight

Calls from birds on beach