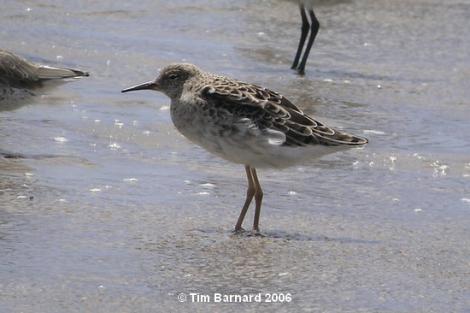 The ruff is a medium-sized migratory wader which displays sexual dimorphism and considerable variability in size and plumage colour. It is a lek-breeder, where extravagantly-plumaged males gather at display arenas where they each defend and display within a small mating court. Females (known as reeves) visit the lek to select a mate and copulate, then go elsewhere to do all the incubation and chick care. The male takes no further part in the breeding effort, and the most successful males can have many mates. The long plumes (particularly the ruff from which they get their name) are never seen in the southern hemisphere, presumably because they would impede their long-distance migration required to return to the breeding grounds in northern Eurasia. The ruff is the only member of the genus Philomachus, and is a rare vagrant to New Zealand.

The ruff is a plump-bellied wader of variable size with a relatively long neck and small head with a short, slightly down-curved, typically dark bill. They show a large variability in size with males larger than the females (which are known as reeves). The non-breeding plumage of ruff and reeve is similar: uniform brown-grey back, white belly and throat with a faint brown band across the breast. The wing coverts may show a pale edge giving a scaly effect. The folded wings extend to the tip of the tail. In flight two distinctive oval patches of white on each side of the rump are visible, and there is also a narrow white wing bar. In breeding plumage ruff have black barred lower back and tail, and white undertail. The most noticeable features are the collar and head tufts, which may be a range of colours: black, purple, chestnut, buff in territorial males or white in satellite males. Faeder males (see later) resemble reeves, but are larger. The breeding plumage of the reeve is similar to non-breeding plumage with some mottling on the back and pale edges to the feathers and more colour on the throat. The leg colour (both sexes) ranges from red through yellow, green and brown to grey. Their flight is with erratic, slow wingbeats and flicking. Ruffs and reeves stand upright, but walk with the body horizontal. They feed in grass or by probing in mud.

Similar species: buff-breasted sandpiper is smaller and browner, and lacks the white patches on the rump and wing bar. Non-breeding ruffs (including reeves) resemble sharp-tailed sandpiper in colouration and shape, but are much larger, have longer legs, and appear large-bellied and small-headed.

Ruffs breed in northern Europe and Siberia, and migrate (from mid-July) to Africa, the coasts of western Europe and southern Asia. There are also non-migrating populations in the Netherlands and Britain. They winter on marshy meadows, sewage farms, and lake edges, and less commonly on estuaries.

Ruffs breed in ‘leks’ in marshlands in northern Europe and Siberia. Typically 5 to 20 territorial males (those with coloured ruffs, c.84%) hold territories at the lek, with satellite males (those slightly smaller in size with white or mottled ruffs, c.16%) moving freely through the area. Faeder males (those intermediate in size between males and females, up to 1%) are permanent female mimics. Females mate with males at the lek, showing a preference for faeder males. Ruffs are polygynous, polyandrous and bisexual (faeder males mounted by or mounting other males). Nests are situated up to 400 m from the lek site. The four eggs are incubated by the female; young leave the nest soon after hatching.

Ruffs can be solitary or associate with other waders, especially pied stilts. Most New Zealand records have been of single birds, with 2 birds present at Lake Ellesmere on 3 occasions.

A large sandpiper. Body weight similar to a knot, but markings and proportions reminiscent of a long-legged sharp-tailed sandpiper with a pot belly.

Calls from a small group