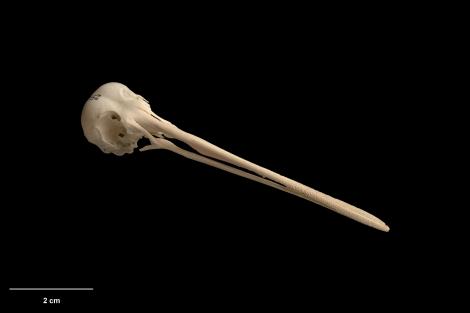 Forbes’ snipe is one of the most mysterious of New Zealand’s birds. It was described in 1893 based on skulls from Chatham Island that had markedly longer bills than those of the living Chatham Island snipe Coenocorypha pusilla. The apparent co-existence of two species of snipe on the Chatham Islands is remarkable, as no other land mass in the region (including the much larger South and North Islands) had more than a single species of snipe. Forbes’ snipe is known from cranial bones (skulls and mandibles) from Chatham and Pitt Islands. There are currently no known methods or definitions to separate post-cranial bones of C. chathamica and C. pusilla. The large number of snipe limb and thoracic bones from the Chatham Islands (including a coracoid from Mangere Island) are best lumped together as ‘Coenocorypha sp.’ Recent genetic comparisons of the living forms of Coenocorypha snipes indicate that the Chatham Island snipe (the smallest species) separated from the Snares Island snipe (C. huegeli) about 42,000 years ago, and that both these species separated from the subantarctic snipe (C. aucklandica) about 96,000 years ago. The bill length of Forbes’ snipe is very similar to that of the subantarctic snipe, and so it is possible that Forbes’ snipe were descended from the original snipe to colonise the Chatham Islands (perhaps concurrent with snipe reaching the Auckland Islands), and that the more recently colonising form (pusilla) evolved a smaller body size and bill length to reduce competition with the resident species. An alternative theory is that a single snipe species only was present on the Chatham Islands, but that it was formerly much more variable in size, with only the smallest individuals represented in the tiny population that persisted on Rangatira Island. This intriguing possibility may explain sightings of ‘giant’ snipe by conservation workers on Rangatira Island in 1999-2001. Unfortunately the bird (or birds) was not photographed or caught for measuring and genetic sampling.

Henry Forbes’ description of ‘Gallinago chathamica’ was exceedingly brief: “A very much larger species than G. pusilla. The bill is 3 inches in length”. Percy Lowe quantified this, describing the length of the bill (defined as from the tip of the premaxillae to a line joining the proximal ends of the outer processes of the nasals) as 63-77 mm (n = 8), compared to 54 mm for C. pusilla. Combining Lowe’s measurements with those from 21 skulls in the Te Papa collection (C. Miskelly unpubl.), four Coenocorypha snipe species had bills of the following lengths (mm): C. chathamica mean 71, min 62, max 77, sample size = 14; C. aucklandica mean 70, min 68, max 74, sample size = 4; C. huegeli mean 60, min 57, max 64, sample size = 3; C. pusilla mean 54, min 51, max 55, sample size = 11. Other than geographical location, there is no described difference between skull bones of Forbes’ snipe and those of the subantarctic snipe.

Bones have been found in dune and cave deposits on Chatham and Pitt Islands.

Snipe are presumed to have been extirpated by Pacific rats on Chatham Island between 1500 and 1800 A.D., and by feral cats on Pitt Island by the late 1800s. The timing of the disappearance of the larger species (or form) chathamica in relation to the smaller pusilla on these islands is unknown.