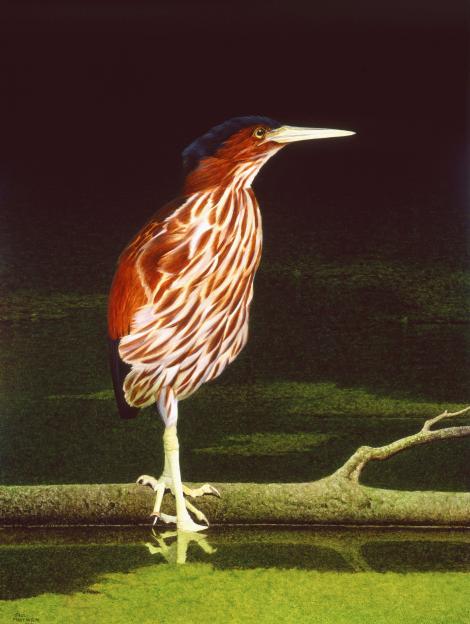 There are several kinds of small bitterns found over various parts of the world, but New Zealand had its own. Like several of our poorly known species it had an identity crisis, with some ornithologists suggesting that it was similar or identical to the Australian little bittern. It is now recognised as having been a distinct species.

Most of the New Zealand little bitterns were collected on the West Coast, apart from a very early record from Tauranga and a specimen collected at the head of Lake Wakatipu. A few fossil bones are also known. It was never a common bird in European experience and was said to “hate civilisation.” The last definite records were from the mid 1890s.

The crown and nape of adult male New Zealand little bitterns were bluish black, and the throat buff, merging to rich chestnut on the hind neck. Brownish spotting on the foreneck formed an irregular reddish brown streak along the centre. The face was buffy chestnut, with a rich chestnut streak over the eye and a less distinct browner patch from the gape below the eye finishing below the ear. The upper back was black with reddish brown streaks at the base of the neck becoming browner towards the tail. The tail was black and the flight feathers dark brown. The upper wing surfaces were chestnut from the wing joint and blackish brown streaked with buffy brown closer to the body. The under sides were buffy white with blackish spots, larger and almost forming irregular stripes on the sides of the breast. The bill was dark brown with the lower edge yellowish green. Bare skin between the bill and the eyes was yellowish green, the eye golden yellow and the legs green. Female New Zealand little bitterns appear to have had similar plumage to males, which is unusual in small bitterns. Young birds were browner below and blacker on the back, while the upper wing was entirely rich tawny buff.

Voice: wild birds were not known to call but Buller noted that a captive bird showing alarm at a cat gave “a peculiar snapping cry” and “when molested it uttered a cry not unlike that of a kingfisher, but not so loud.”

New Zealand little bitterns were probably once widespread in New Zealand. Subfossil bones have been found widely in the North and South Islands and also on Chatham Island. Almost all birds collected in the 1800s came from the West Coast. Here, William Docherty recorded that “They are to be found on the salt-water lagoons on the sea shore, always hugging the timbered side. … I caught one about two miles in the bush on the bank of a creek, but the creek lead to a lagoon.” Two were taken near a deep, slow flowing fresh water stream near Kaniere.

The early scarcity of New Zealand little bitterns may have been due to the early spread of Norway rats and feral cats throughout New Zealand. A captive bird showed alarm at the presence of a cat. Their final demise seems to coincide well with the first wave of the stoat invasion on the West Coast and was before the wetlands were drained for farming.

It was said to nest on the ground but it is unclear if this was a guess or whether a nest was actually seen. An egg taken from inside a dead bird was said to be large.

Docherty noted that “I have seen them in two positions, standing on the banks of the lagoon with their heads bent forward, studiously watching the water and standing straight up, almost perpendicular; I should say this is the proper position for the bird to be placed in when stuffed. … They are always found alone and stand for hours in one place.”

Birds in captivity ate mudfish and worms, but would only take food served in water.

A small heron with a brown and yellow bill, yellowish-green facial skin, golden yellow eyes and green legs. Adults had bluish-black, buff, chestnut and reddish-brown plumage with brownish spots on the foreneck and an irregular reddish-brown streak along the centre.