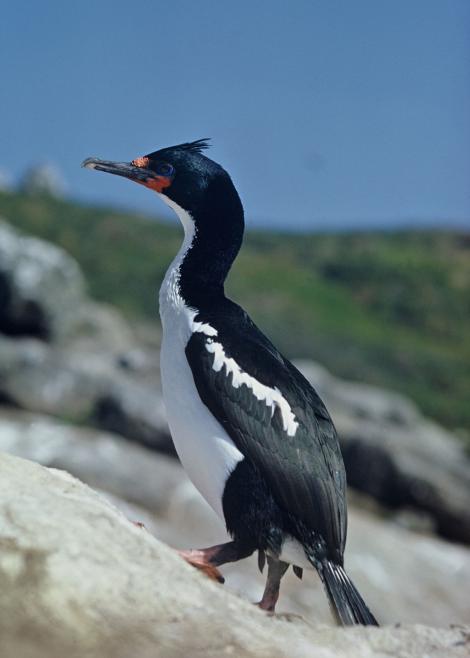 The Chatham Island shag is a critically endangered shag which, as its name suggests, is restricted to the Chatham Islands. It is the only large black-and-white shag in the island group. Despite their declining population, Chatham Island shags can still readily be found roosting on headlands along the rocky coast line. They are entirely marine, dispersing from colonies and roost sites to forage in coastal waters and within parts of the brackish Te Whanga Lagoon. During breeding, compact colonies form on rocky headlands and offshore islets located throughout the Chatham Islands.

The only large black-and-white shag, and the only one with pink feet, found in the Chatham Islands. Adult Chatham Island shags have a black head, hind neck and back, with white patches on the wings that appear as a white bar when the wing is folded. The chin, throat, breast and under wing are white. In flight, they have a white bar on the inner part of the upper wing, and another white patch on the back. The head is held lower than the body when flying. During the breeding season, the facial skin is dark purple with prominent orange-red caruncles above the base of the bill; this colour fades outside the breeding season. The upperparts of juveniles are dark brown rather than black, and the wing and dorsal patches are pale brown rather than white. Juveniles lack facial caruncles, and have pale purple facial skin.

Voice: Chatham Island shags are noisy at colonies, with a range of ticking, gargling and barking calls given by males; with females uttering soft puffing calls. They rarely call away from colonies.

Similar species: The Chatham Island shag is unmistakeable within the Chatham Islands. It is very similar to the New Zealand king shag and the pied morph of the Stewart Island shag, and would be difficult or impossible to separate from them if one ever reached the South Island.

The Chatham Island shag population has undergone significant decline in the past 15 years. In 1997 the breeding population was 842 pairs, but had declined to 355 pairs in 2011.

Populations of Chatham Island shag are threatened by loss of breeding habitat, disturbance from stock, human persecution, introduced predators, and gull predation. However, given that population declines have been recorded at colonies on remote predator-free offshore islands, it is likely that some type of at-sea effects are impacting on the population. There has been no direct conservation management action to benefit Chatham Island shag other than co-ordinated island-wide population censuses. The recent increase in fencing coastal habitats on the Chatham Islands will prevent stock from gaining access to some colonies, thereby reducing disturbance.The conservation status of this species was changed from nationally endangered to nationally critical.

Chatham Island shags are colonial breeders, forming densely-packed colonies of 5 to 350 pairs. Colonies are found on exposed rocky headlands or offshore islets. Laying is mostly from October to December, but there is much variation both between and within colonies. Birds in the colony in Te Whanga Lagoon breed 3 months earlier than those in other colonies. Little is known about breeding biology. The 2-4 eggs are incubated for about 30 days, with chicks fledging in 4-6 weeks. Birds probably start breeding when three years old.

The diet is mostly small fish (<25cm long), especially flatfish, opalfish and bullies, along with occasional squid, cuttlefish and octopus.

A large black-and-white marine shag with pink feet, blue eye-rings, orange facial skin and orange-yellow facial caruncles. Adults have a black head and back, and a white front with white alar patches on black upperwings.