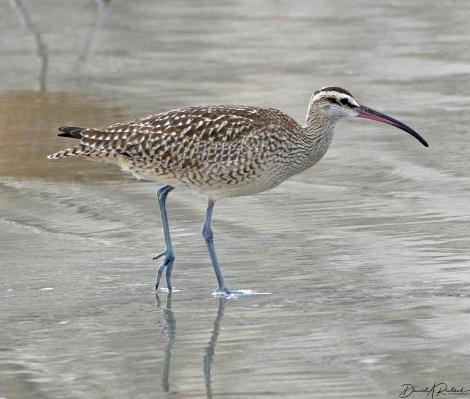 The American whimbrel is a large, migratory shorebird with only a single confirmed record from New Zealand. It is very similar to the Eurasian whimbrel, which reaches New Zealand annually in small numbers.

Both the American whimbrel and Eurasian whimbrel are somewhat larger than bar-tailed godwits and recognisable by their down-curved bill and pale stripe down the centre of the crown. They are mottled dark brown above, pale below, with much brown streaking on the throat and breast. The head is conspicuously striped, with a pale eyebrow stripe separating the dark eye-stripe and side-crown, and another pale stripe down the centre of the crown. The American whimbrel always has a dark rump and back (this is variable in Eurasian whimbrel, most of which have a pale blaze up the back visible in flight). American whimbrels have a cinnamon-buff toned underwing (similar to bristle-thighed curlew) while Eurasian birds have a more greyish tone.

Similar species: eastern curlew is larger with proportionately much longer bill and no crown stripe. Little whimbrel has crown stripe but bill is finer and only slightly down curved. Bristle-thighed curlew is similar in size and structure but has overall cinnamon-buff colouration, a plain (unbarred) orange-buff rump, and a very different call.

A single accepted record: Wairau Bar, Marlborough, December 1873 (Te Papa specimen NMNZ OR.000111). Also a possible sight record from Firth of Thames in May 1964. As dorsal plumage colour is no longer recognised as a reliable character for separating the two whimbrel species, all other New Zealand records of American whimbrel are considered to be unverified.

Several important over-wintering sites are under severe threat from reclamation and pollution.

American whimbrels breed on Arctic tundra across North America. A clutch of 4 eggs is laid in a bare scrape.

In the non-breeding season whimbrels of both species feed on a wide range of estuarine invertebrates including worms but particularly crabs.