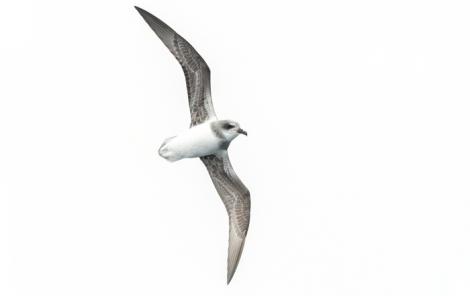 The soft-plumaged petrel is a medium-sized seabird that breeds on numerous subantarctic islands. The only breeding population in New Zealand occurs on the Antipodes Islands, where they were discovered to be present in 1969. Soft-plumaged petrels prefer to nest under dense fern and tussocks around the fringe of the island, perhaps to avoid predation by subantarctic skuas. Over land the birds are best known by their distinctive moaning calls in flight as they are quite cryptic when on the ground. At sea, soft-plumaged petrels range widely over deep water east of New Zealand. They often follow ships but only those sailing well offshore.

The soft-plumaged petrel is a medium-sized dark-grey-and-white gadfly petrel (tube-nosed seabird) with narrow wings and a pointed tail in flight. It has a dark grey head with prominent white feathers on the cheeks and throat, and white speckling on the forehead. There is a prominent dark eye patch. The upper surface is even dark-grey with darker brown-black feathers running across the upper wings and rump in an M-shape The underside is mostly white on the body but with dark grey underwings. The dark neck collar can create a hooded appearance from a distance. In the hand, the black bill (25-32 mm long) has a sharp hook to seize prey. The legs are pink with black on the outer webs and toes.

Voice: the calls of soft-plumaged petrels are quite distinctive with medium-pitched musical moans and shrill squeaks.

Similar species: Chatham Island taiko (very rare) is larger with darker head plumage and underwing, and no obvious M-shape on upperwing). White-headed petrel is larger with an all-white head with no collar, and is paler grey on the upper body.

Soft-plumaged petrels breed in small colonies on Antipodes Island and occasionally prospect on the Chatham Islands. Elsewhere they breed on various subantarctic islands in the South Atlantic and Indian Oceans, and recently have been recorded from several islands south of Australia. They nest in burrows amongst tussocks, ferns or low shrubs on Antipodes Island. The breeding burrows are normally dug on well-drained slopes in dry peaty soils. Soft-plumaged petrels forage over cold water north of 55°S, mainly over deep water beyond the continental shelf. After the breeding season, they migrate to the central South Pacific to complete their annual feather moult.

There are no robust estimates of population size from the breeding islands. The best guess is about 5 million birds. The population on Antipodes Island is possibly about 2500-5000 pairs but needs a definitive survey. The largest population (millions of pairs) occurs on Gough Island in the Atlantic Ocean.

The soft-plumaged petrel breeding season is from September to May with the single large (59 x 43 mm) white egg laid from early to mid- December and hatched in January. The egg is laid in a well-lined nest at the back of a fairly long burrow (1-1.5 m long). There have been no detailed studies on the breeding biology of this species.

Soft-plumaged petrels are nocturnally active at breeding grounds. Their activity ashore is more pronounced on dark nights (no moon) or during periods of wet, stormy weather. The birds can be quite noisy when flying over the islands and call repeatedly, with many birds engaged in aerial chases. There is very little calling on the surface and birds are quite subdued even in burrows. This makes it very difficult to locate birds once they land. At sea the birds range widely away from the breeding colonies. They are occasionally seen following in the wake of ships. The soft-plumaged petrel seems to forage only over deep water beyond the continental shelf and are rarely seen close to land, except near breeding colonies. They forage over seas with a wide range of temperatures, from sub-antarctic seas to warmer sub-tropical seas in the winter.

Soft-plumaged petrel diet is poorly known. They have been recorded feeding on squid, crustaceans and small fish. There is no information yet on whether the feeding is done mainly by day or at night.

A medium-sized dark-grey-and-white gadfly petrel with a dark grey head, white cheeks and throat, a prominent dark eye patch, a black hooked bill and pink legs. The upper surface is dark-grey with darker brown-black feathers across the narrow upperwings and rump in an M-shape, the underside is white with dark grey underwings, and the tail is pointed in flight.