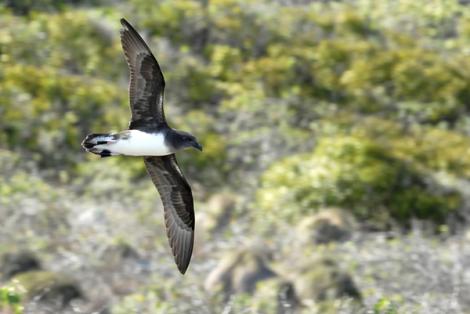 The Phoenix petrel is a rare and little known seabird of the tropical Pacific. It has twice been recorded at the Kermadec Islands (1913 & 1982), and is otherwise unknown from the New Zealand region. Like several other tropical petrel species, it nests on the ground surface, rather than in a burrow. This is thought to be due to the absence of aerial predators (skuas, hawks, falcons and owls) on most small tropical islands. Petrels that nest in temperate latitudes, including New Zealand, are almost all burrow nesters.

The Phoenix petrel is medium-sized ‘hooded’ gadfly petrel, with the dark head clearly demarcated from the white underparts. The head, back, throat and upper breast are dark greyish- or chocolate-brown. The lower breast, belly and undertail are white, with some dark flecks under the tail. The chin and upper throat pale. The underwing is dark brown, with a pale strip along the leading edge of the inner wing, and usually with a second irregular pale strip along the centre of the underwing. These markings are similar to those of Chatham Island taiko, Tahiti petrel, intermediate morph Kermadec petrel, and pale morph Herald petrel (latter not yet recorded from New Zealand). There is no significant plumage variation with age or sex. The bill is black, the eye dark, and the legs and feet pink, with black outer toes and webs.

Similar species: the Phoenix petrel is difficult to identify due to similarity to several other petrel species. It is very similar to some plumage morphs of the variable Herald petrel (in particular) and Kermadec petrel. Pale morph Herald petrels (Pterodroma heraldica – not recorded from New Zealand) differ in having prominent white scaling on the forehead, a less complete dark band across the upper breast, and pale bases to the primary feathers on the outer underwing. Intermediate morph Kermadec petrels have pale bases to the primary feathers on the outer underwing, plus prominent pale primary shafts visible on the outer upperwing. Chatham Island taiko is slightly larger, usually has white on the forehead or above the eye, has whiter undertail coverts, and silvery underwing that often reflects light. Tahiti petrel is more heavily built with more massive bill (accentuated by a small head and long neck), browner plumage, and lacks the pale patch on throat. It is also has longer, straighter wings, and flies with a more languid, leisurely style.

Four birds were seen by William (King) Bell on the forest floor of Raoul Island (Kermadec Islands) on the night of 7 March 1913. He collected one, which was named as a new species (Aestrelata oliveri), now considered to be a typical Phoenix petrel. The specimen is in the American Museum of Natural History.

A single bird flew over the slopes of Curtis Island, southern Kermadec Islands, on 21 May 1982, looking like it was intending to land, before it headed out to sea again.

Phoenix petrels exhibit typical gadfly petrel behaviour at sea, flying in high-banked arcs and glides, with wings angled forward and swept back at the carpal joint (cf. Tahiti petrel). They visit breeding islands by day, nesting in a surface scrape under trees or low vegetation. The single white egg is incubated by both parents, who also share care of the chick. There is no fixed breeding season.

Phoenix petrels mainly eat squid (78% by volume), also fish (14%) and small arthropods (8%), taken from or near the sea surface.

A medium-sized ‘hooded’ gadfly petrel with a dark head demarcated from white underparts, a dark greyish- or chocolate-brown head, back, throat and upper breast, white lower breast, belly and undertail, pale chin and upper throat, black bill, dark eyes and pink legs. The dark brown underwing has a pale strip along the inner leading edge and an irregular pale strip along the centre.

Calls from bird on ground beside nest