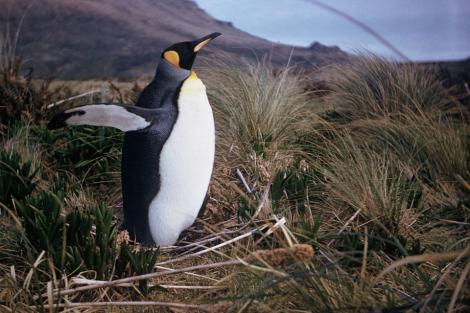 The flightless penguins are the most marine of birds, spending more time at sea than any other group of birds. The tall, colourful king penguin is one of the largest and most spectacular. It uses 36 cm flipper-like wings to swim, can dive more than 300 m below the surface to pursue prey, and can remain underwater for over 9 minutes. When ashore to breed, king penguins stand upright to walk on large, powerful webbed feet, and can toboggan on snow or ice by pushing forward with their feet and flipper-like wings and sliding on their bellies. They are highly social birds, gathering in huge colonies to breed on the coasts of subantarctic islands. They do not make a nest, instead laying a single greenish white egg which is incubated on the parents' webbed feet and kept warm with a fold of skin. King penguins have the longest breeding cycle of any penguin species. Unable to fledge a chick within one year, they have evolved one of the strangest breeding cycles of any bird species. There are two egg-laying periods, which they alternate, allowing them to produce two young every three years.

King penguins are slightly smaller and lighter than their southern relative, the emperor penguin, making them the second largest penguin species. Adults have bright golden-orange spoon-shaped head markings on both sides of the neck, grading to paler orange on the upper breast, fading to yellow, then white. The rest of the head, chin and throat are black with a greenish sheen, the back is silvery-grey, and the belly is satin white. The flipper-like wings (up to 36 cm long) and tail are black. The long, slender, black decurved bill has a prominent orange stripe along the lower mandible. The eye is dusky brown and the feet black. The sexes are alike, although females are slightly smaller. Chicks are black and almost naked at first, gradually growing brown down. These downy chicks are so different in appearance to adult birds that early European explorers described them as a separate species they named 'woolly penguin'. Immature birds resemble adults, except the crown feathers are black with grey tips, the throat is greyish-white, the head markings are pale lemon yellow to white, and the bill has a pink to silvery white stripe along the lower mandible.

King penguins are circumpolar colonial breeders on subantarctic islands, including 70,000+ pairs on Australian-administered Macquarie Island south of New Zealand. They also breed on South Georgia and Falkland, Marion, Prince Edward, Crozet, Kerguelen, Heard and possibly Staten Islands. They have a more northerly distribution than emperor penguins, but the pelagic ranges of the two species may overlap off eastern South America. At sea, king penguins are mainly found in a band between 40°S and 55°S. Within the New Zealand region vagrants regularly reach Campbell Island, more rarely moulting at Auckland, Snares and Antipodes Islands in summer and autumn. Stragglers have been recorded on the New Zealand mainland at Stewart Island, Catlins coast, Taieri mouth, Moeraki, Timaru and Barrytown in the South Island, and Auckland Harbour. This last bird is likely to have been released from a ship.

King penguin colonies are usually on flat beaches with no snow or ice, and normally with easy access to sea.

The world population of king penguins is estimated at 2.23 million pairs and is increasing.

At Macquarie Island one colony was exterminated and another reduced to 5000 when king penguins were killed and rendered down for oil before 1920. The main threat today is changes in oceanic productivity near the breeding islands, associated with climate change. Research by a  team at the University of Strasbourg found that warming of the sea surface by as little as several tenths of one degree poses a serious threat to king penguins. The study tracked more than 450 king penguins over nine years and found that warm events negatively affected breeding success and adult survival. The derived population dynamic model suggested a 9% decline in adult survival for 0.26°C of warming. The authors suggested that king penguin populations were "at heavy risk of extinction" based on projections of the UN Intergovernmental Panel on Climate Change (IPCC). The IPCC predicted an average temperature increase of approximately 0.2°C per decade for the next two decades.

Uniquely among bird species, king penguins breed twice every three years. Arrival times at colonies vary between September and November, and some birds are present at breeding colonies and nesting all year round. King penguins do not make a nest, instead laying a single, pale, greenish-white egg which is incubated on the parents' webbed feet and kept warm with a fold of skin. Both parents share incubation and chick rearing. Elaborate courtship displays involve the male advertising with repeated calling, head-lifting postures, and holding out his flippers. If successful in attracting a female, both birds face each other, shaking their heads vigorously while calling.  Laying of the single egg is spread between November and April, with peaks in mid-December and early February. Incubation is shared, and takes about 54 days. The chick is brooded by either parent for about 39 days after hatching. Chicks are then left alone and gather into creches for nine months or more until fledging. Adults do not guard creches.

King penguins at their colonies are typically segregated, with breeding birds occupying different areas from non-breeding birds that are moulting or roosting. Adults and chicks are segregated in winter. King penguins feed in large groups near colonies during the breeding season. Offshore, they travel and rest in small groups of 5-20; they are often solitary when diving for food. King penguins are pelagic outside the breeding season. A layer of fat beneath the skin allows birds to conserve body heat and survive freezing temperatures. They also rely on this body fat during the annual moult, when they are unable to go to sea for more than 3 weeks.

King penguins eat fish, squid and krill, for which they dive up to 100 times a day, mainly foraging near the ocean floor. Prey is caught by pursuit-diving, the birds swimming at up to 12 km/h, normally no deeper than 50 m. The deepest dive recorded was 343 metres and the longest dive, 9 minutes 20 seconds. Skuas, giant petrels, sheathbills and southern black-backed gulls take king penguin eggs, and harass and prey on chicks. Orca and leopard seals prey on adults at sea.

A very tall, stocky black-and-white penguin with a relatively small head with bright golden-orange spoon-shaped markings on both sides of the neck and a long, slender decurved black bill with an orange stripe. The rest of the head and the chin, throat, tail and flipper-like wings are black, the back is silvery-grey, and the belly is satin white.

Chicks and adults in colony

Chick and adult calls on colony